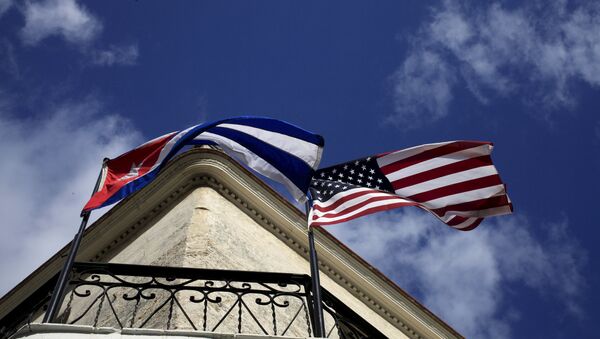 WASHINGTON (Sputnik) — Earlier this week, former Cuban President Fidel Castro said his country is a self-sufficient nation that does not need any "gifts" from the US empire in terms of material and spiritual wealth.

"The agenda by the United States to get a regime change in Cuba. I think it’s very clear this remains the goal," University of Illinois Professor of International Law Francis Boyle told Sputnik. "Obama has concluded that the best way to promote regime change is the promotion of democracy and human rights."

Regime change and the promotion of democracy however, violate Article 18 of the Charter of the Organization of American States of which both, the United States and Cuba are member nations, Boyle pointed out.

"Article 18 prohibits interference at any time in the internal affairs of other member states."

Despite control of both chambers of the US Congress by his Republican political enemies, Obama still had the executive power to move far faster on dismantling the 55-year US economic embargo on Cuba, but he had chosen not to so, Boyle insisted.

"Obama has the authority using his executive powers to raise all sanctions on Cuba imposed under the authority of the Trading with Enemy Act, but he has not done so. Actually, he is deliberately throwing them out [to Havana] item by item to get the maximum concessions out of Havana."

Boyle predicted this cautious incremental policy would continue both under Obama and his successor.

"This and the next administration can be expected to cautiously and deliberately pursue the same incremental pressures to force concessions steadily out of Havana to open country up to the US regime-change agenda."

Professor Jean Bricmont of the University of Louvain in Belgium, author of "Humanitarian Imperialism," agreed that increasing access to US trade and investment would bring different pressures to bear on Cuba’s socialist domestic system.

"The Cuban leaders — and the Cuban people too — have always demanded a lifting of the sanctions and of the embargo," Bricmont acknowledged. "But if that happens, and we are a long way from there, it will affect their kind of socialism in unpredictable ways."

Opening Cuba to the global economy would increase the pressures for Havana to integrate within the world market which is not sympathetic to socialism under any form, Bricmont pointed out.

"I am sure the Cuban leaders are aware of that and they want to reform their economy anyway towards greater ‘opening.’ Whether this will destroy their educational and health care system which is unique in the Third World remains to be seen."

However, the Obama administration at least had finally recognized that 55 years of isolating Cuba had failed to topple or even weaken its government, Bricmont observed.

"One thing is certain: the policy of ‘isolating’ has failed and is not in the interest of the United States."

On March 22, Obama completed his two-day historic visit to Cuba, which marked the first time a US president stepped foot on the island since 1928.