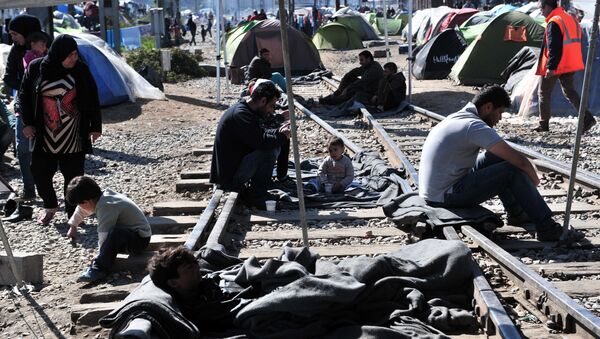 © AFP 2021 / SAKIS MITROLIDIS
Subscribe
The Office of the United Nations High Commissioner for Refugees (UNHCR) considers that 480,000 refugees from Syria are in need of resettlement, UN Secretary-General Ban Ki-moon said Wednesday at the meeting on global responsibility sharing for Syrian refugees.

Syrian Refugees in Jordan Blocked From Assessing Health Care Services
GENEVA (Sputnik) – According to UNHCR, one Syrian refugee out of 10 is in need of resettlement or other kinds of acceptance to the third countries.

"That is 480,000 people – a relatively small number, compared with the millions being hosted by Turkey, Lebanon and Jordan," a statement published on the UN website quoted the secretary-general as saying.

According to the UN refugee agency, the violent armed conflict in Syria has killed more than 260,000 people and forced about 4.8 million to flee the country. Over 13.5 million Syrians are in need of humanitarian aid.