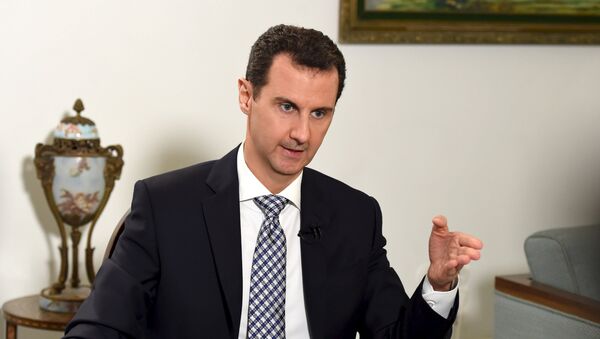 The format of the new Syrian government should be agreed upon during the Geneva talks, Syrian President Bashar Assad said in an interview with Sputnik.

DAMASCUS (Sputnik) — In his opinion, “it is logical that independent forces should be represented there, as well as opposition forces and forces loyal to the government.”

#ASSAD TO #RiaNovosti & #Sputnik: A national unity government should consist of all Syrian political forces.

​“That’s the goal of 'Geneva' — an intra-Syrian dialogue during which we will agree on the format of this government. Of course, we have not yet worked out a final understanding, because other Syrian parties have not yet agreed to this principle. Some have agreed, but we will announce how it will be implemented in practice when we work out this principle all together,” Assad said.

#ASSAD TO #RiaNovosti & #Sputnik: The transitional period should continue under the present #constitution.

​“With regard to how it will be distributed from the technical perspective, as you know, there are ministries with briefcases and without, there are ministers who will join the government without having experience working in it, and how will they resolve the citizens’ daily problems? There are a lot of similar questions that we must discuss in Geneva, but they are not difficult questions. I do not consider them difficult, they can all be resolved,” the Syrian president stressed.

Assad highlighted that the People’s Council will not play any role in this process.

"This process will be carried out between us and the opposition from abroad… The People’s Council regulates the work of the government, but in Syria it does not appoint the cabinet of ministers,” he explained.

#ASSAD TO #RiaNovosti & #Sputnik: In the #Geneva talks, a methodology for successful negotiations was set.

​Bashar Assad is not expecting any major changes in the Syrian parliament following the elections scheduled for April 13.

“In the current conditions I do not expect that we will become witness to any core, major changes,” Assad said in an interview with Sputnik.

Assad said that now “it is not enough to just have new parties, like it was during the 2000 parliamentary elections.”

“You can create 100 parties, but that does not mean that they will represent everybody at the elections. Which form will a Syrian citizen approve for going to vote? This question, as you know, does not get resolved fast. Time is needed for its resolution. Every new party must get its point of view, political program across to the citizens…in such difficult conditions it is possible that citizens, due to their nature, will not want to experience innovations,” the Syrian president explained.

“It is possible that when the security situation improves we will have a more positive perspective on this. Then politics will play a more important role for the citizens, than concerns about the questions of daily life. Today, citizens are thinking about their security first of all, about the security of their lives, then — about everyday problems, children’s education, health. Only after that they start to think about other issues,” he said.

Assad:Terrorism in Syria, Iraq Directly Supported From Turkey, Saudi Arabia
The intra-Syrian talks resumed in Geneva on March 14. The Syrian government delegation headed by Syria's Ambassador to UN Bashar Jaafari, Syrian opposition High Negotiations Committee formed in Riyadh, as well as representatives of the opposition formed after talks in Moscow and Cairo, and Syrian opposition formed at Hmeimim have all met in Switzerland. Kurdish representatives have not received an invitation to join the talks.

Following the talks, UN Special Envoy for Syria Staffan de Mistura created a document, which, according to him, highlights common ideas of the Damascus delegation and the opposition. There are a total of 12 points in the document. Currently, the government representatives and the opposition are considering de Mistura’s proposals. It is expected that before the beginning of the next round of talks they would agree on the document, or propose some changes.

The next round of indirect talks between the Syrian government and the opposition is expected to begin on April 11.