Russia, US Interested in Swift Lifting of Sanctions – Russian Minister 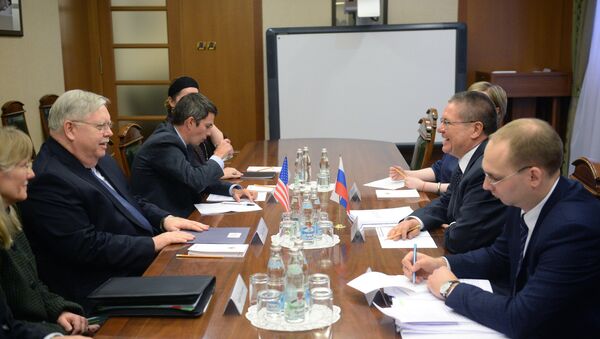 "The issue of sanctions was raised, our general impression, understanding, that of course, this is a story that has an ending and we would like it to end as soon as possible," Ulyukayev told reporters after the meeting.

He added that the United States was linking the lifting of anti-Russia sanctions with the implementation of the Minsk agreements on Ukrainian reconciliation.

Economic Blockade, You Say? This is Why Russia is not Afraid of Sanctions
"We fully support this approach, but note that this is a problem that does not have a one-sided approach, but only a multilateral one, and we invite everyone to participate with us in addressing this issue," the minister said.

Earlier in the day, Tefft denied that the issue of anti-Russia sanctions had been discussed at the meeting with the Russian official.

The United States imposed a series of sanctions against Russia in 2014, accusing it of interfering in the conflict between the Kiev government and independence forces in southeastern Ukraine's Donbas region.

The Kremlin has repeatedly denied the allegations, stressing that it was an instrumental party in negotiating the Minsk agreements aimed at ending hostilities between Kiev and the Donbas militias.