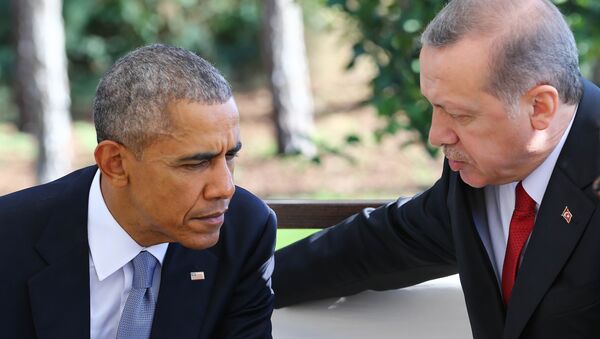 US President Barack Obama will not have a personal meeting with his Turkish counterpart Recep Tayyip Erdogan during Erdogan's upcoming visit to the United States, media reported.

US, Turkish Businessman May Strike a 'Secret Deal' Against Erdogan
MOSCOW (Sputnik) — A number of world leaders, including Erdogan, are expected to gather for the Nuclear Security Summit (NSS), due to run in the United States from March 31 to April 1.

Obama has rejected Erdogan's request to participate in a joint event and the US leader has no plans to have a one-on-one meeting with his Turkish counterpart, The Wall Street Journal reported Sunday, citing US officials.

The newspaper added that Erdogan might have a personal meeting with US Vice President Joe Biden instead of Obama.

Obama is said to have only one-on-one meeting planned during the NSS, with Chinese President Xi Jinping.

Ankara is one of Washington's closest partners in the Middle East, assisting the US anti-terror struggle in the region.