Pope Francis Kneels In Front of Refugees to Kiss Their Feet 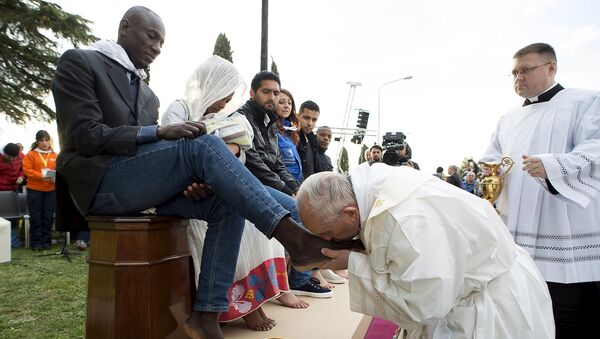 © REUTERS / Osservatore Romano
Subscribe
International
India
Africa
While the world tries to recover from the bloody terrorist attacks in Europe, Pope Francis has again demonstrated a sign of love and reconciliation between various religions, media reported.

World
Pope Francis Urges Abolition of Death Penalty
On Friday, the head of the Catholic Church knelt down in front of refugees who fought through every hardship to arrive in Italy, washing and kissing their feet.

The move was meant as a sign of love for one's neighbor and reconciliation with various religions.

People of various religions, including Muslims and Christians (many of whom fled Nigeria to escape Boko Haram violence), were invited to take part in the ceremony.

In his message, the Pope stressed that all people regardless of their religion and cultural traditions are "brothers". He also condemned the recent terrorist attacks in Brussels calling them a "gesture of the war and destruction".

"For us, Muslims, what is happening here is a symbol of peace," said 37-year-old Sira Madigata, cited by the German newspaper Berliner Kurier. Madigata was watching the ceremony of the feet washing and said that the Catholic leader is a great personality. For the first time, women were also invited to take part in the symbolic event.

A ceremony of that kind has never been organized by Pope Francis' predecessors, who only washed the feet of the priests and did not approach ordinary people. Some conservative Catholic priests have been displeased with Pope Francis' move, claiming that such ceremonies are not specified by the Vatican rules.