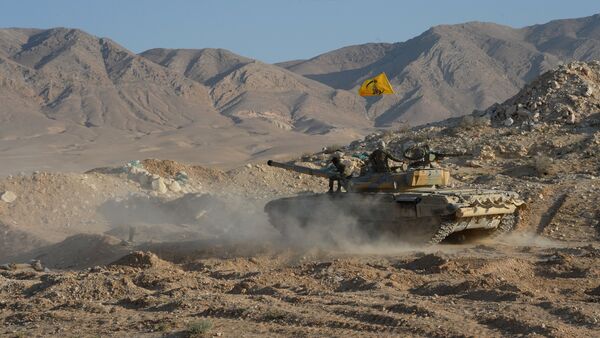 © Sputnik / Mikhail Voskresenskiy
/
Go to the photo bank
Subscribe
The liberation of Palmyra will effectively cut Daesh forces in half, opening the road to Raqqa and Deir ez-Zor, according to the commander of the Russian taskforce in Syria.

Syrian Army Takes Giant Step to Crush Daesh in East Palmyra
Retaking the city of Palmyra, a place of considerable historical and geographical importance, will allow the Syrian forces to effectively bisect their Daesh enemies and present an opportunity to establish control over the border with Iraq, according to Col. Gen. Alexander Dvornikov, commander of the Russian military taskforce that has been deployed to Syria.

"The city of Palmyra, located in the eastern part of Syria, is blocked and the fight to liberate it continues. Securing this city – a place of special historical and geographical significance to Syria – will effectively split the Daesh forces in two. It will also open the road to Raqqa and Deir ez-Zor, not to mention [provide us with] the opportunity to establish control over the border with Iraq,| Dvornikov said, according to RIA Novosti.

Meanwhile, the Syrian Arab Army forces, aided by militia units, have already liberated the historical part of the ancient city and continue to hammer the Islamist forces that remain entrenched in an attempt to hold the location.

Palmyra has been under Daesh control since May 2015. The terrorist group, which has been blacklisted in many countries including Russia and the United States, has already destroyed part of the ancient city, which is a UNESCO World Heritage site.

000000
Popular comments
Palmyra; A good location for the 'historical' Presidential libraries of Bush and Obama, along withe their real life busts.
marcanhalt
24 March 2016, 14:04 GMT1
000000
They thought the atrocities and R..p's and other things would last forever? They joined looking for mental fantasies that the laws wouldn't allow. Like point the finger to that teen and have her , without conditions. For many that deranged thought is GOOD. They joined for the sensational opportunity, without thinking of the consequences of such acts. Wait until many that think it will all be ok, get nailed. Poroschenko is a war criminal. With crimes against humanity. So does Israel leadership. Washington, The list is big. And if they don't get stopped, don't cry when the worst falls on humanity.
cast235
24 March 2016, 14:16 GMT
000000
Newsfeed
0
New firstOld first
loader
LIVE
Заголовок открываемого материала
Access to the chat has been blocked for violating the rules . You will be able to participate again through:∞. If you do not agree with the blocking, please use the feedback form
The discussion is closed. You can participate in the discussion within 24 hours after the publication of the article.
To participate in the discussion
log in or register
loader
Chats
Заголовок открываемого материала
Worldwide
InternationalEnglishEnglishMundoEspañolSpanish
Europe
DeutschlandDeutschGermanFranceFrançaisFrenchΕλλάδαΕλληνικάGreekItaliaItalianoItalianČeská republikaČeštinaCzechPolskaPolskiPolishСрбиjаСрпскиSerbianLatvijaLatviešuLatvianLietuvaLietuviųLithuanianMoldovaMoldoveneascăMoldavianБеларусьБеларускiBelarusian
Transcaucasia
ԱրմենիաՀայերենArmenianАҧсныАҧсышәалаAbkhazХуссар ИрыстонИронауОssetianსაქართველოქართულიGeorgianAzərbaycanАzərbaycancaAzerbaijani
Middle East
Sputnik عربيArabicArabicTürkiyeTürkçeTurkishSputnik ایرانPersianPersianSputnik افغانستانDariDari
Central Asia
ҚазақстанҚазақ тіліKazakhКыргызстанКыргызчаKyrgyzOʻzbekistonЎзбекчаUzbekТоҷикистонТоҷикӣTajik
East & Southeast Asia
Việt NamTiếng ViệtVietnamese日本日本語Japanese中国中文Chinese
South America
BrasilPortuguêsPortuguese
NewsfeedBreaking
00:30 GMTJamaican Pastor Accused of Human Sacrifices Dies in Car Crash En Route to Court
00:19 GMTEverything You Need to Know Before the Astros and Braves Face Off in the World Series
YesterdayUS Pauses Delivery of $700 Million in Emergency Economic Aid to Sudan
Yesterday‘News Black Hole’: A Year of War Shows Why UN Needs to Monitor Human Rights in Western Sahara
YesterdayUS, UK Condemn Military Coup in Sudan, Vow to Back Democratic Civilian Government
YesterdayInternal Documents Show Facebook Knew it Was Used to Incite Violence in Ethiopia
Yesterday'Wild $T1mes!': Musk Rejoices as Tesla's Value Surpasses $1 Trln Following Hertz's 100,000-Car Order
YesterdayRussian Sailors Saved Panama-Flagged Ship From Pirates in Gulf of Guinea- Defense Ministry
YesterdaySlump in UK COVID-19 Cases Undermines Calls for ‘Plan B’ Lockdown - Epidemiologist
YesterdayMultiple Injuries Reported in Idaho Mall Shooting, One Person in Custody - Police Dept.
YesterdayFacebook, Instagram Delete Video of Brazilian President Linking COVID-19 Vaccines to AIDS
YesterdayEuropean Regulator Approves Booster Dose of Moderna Vaccine
YesterdayUS Very Supportive of EU's Engagement in Iran Nuclear Deal - State Dept.
YesterdayUpdated US Hate Crime Data for 2020 Shows Highest Incident Levels Since 2001 - FBI
YesterdayChinese FM Wang Yi to Meet Afghan Taliban Leaders in Qatar for First High-Level Talks
YesterdayJFK's Nephews Slam Biden Administration After Postponing Assasinaton Records
YesterdayUS Has No Issue With Russia-China Military Drills in Indo-Pacific Region - Pentagon
YesterdayTory MP Says Gender Self-Identification is a Threat to Women’s Rights
YesterdayYellen Appoints Counselor to Promote Racial Equity - US Treasury Dept.
YesterdayAfter Cricket Player Shami Gets Trolled, Indian Parliamentarian Says It Is 'Hatred Against Muslims'