At Least 28 Dead in Terrorist Attacks in Brussels 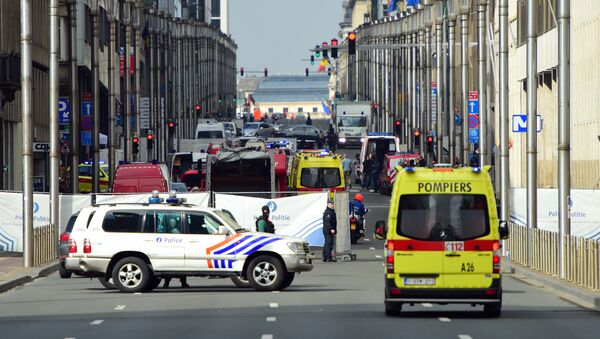 At least 34 people were killed in terrorist attacks in Brussels - 20 in its metro and 14 at the city's airport.

At least one of the two Brussels Airport terrorist attacks was carried out by a suicide bomber, Belgian Federal Prosecutor Frederic Van Leeuw said in a press briefing on Tuesday.

"There were two explosions at a departure hall in Zaventem this morning. One was possibly arranged by a suicide bomber," Leeuw said as media reports emerged of up to 28 deaths.

Leeuw said a third explosion at the Malbeek subway station in central Brussels occurred half an hour after the initial blast.

​The European Parliament has increased security after the explosions in a Brussels airport and metro, the parliament's spokesman said Tuesday.

Explosion Reported at Brussels Metro
A series of blasts hit the Belgian capital earlier in the day, including two explosions in the Brussels Zaventem airport that left 13 people killed and 35 injured. Ten people were reportedly killed in explosions at the Maalbeek and Schuman metro stations in central Brussels, local media reported, citing police.