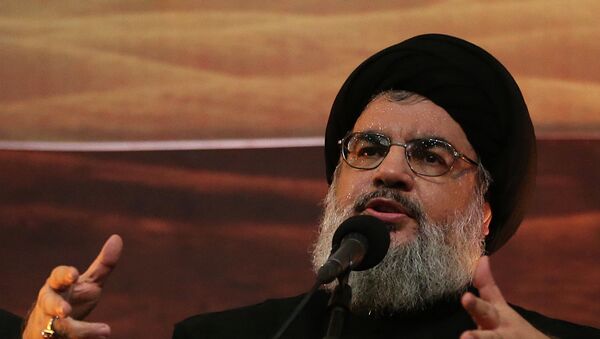 Hezbollah leader has blamed Turkey and Saudi Arabia for disrupting progress towards a political solution in war-torn Syria.

"Saudi Arabia is what first of all disrupts any progress towards a political solution in Syria, and the second is Turkey," Nasrallah told the Al Mayadeen television channel on Monday.

Syria has been mired in civil war since 2011, with forces loyal to Assad's government fighting against numerous opposition factions and extremist groups.

The current stage of negotiations between the Syrian opposition and the government's delegation kicked off in Geneva on March 14 and is expected to wrap up on March 24. The High Negotiations Committee, which was formed in Saudi Arabia, is one of the three major opposition delegations in the talks.

Hezbollah, a paramilitary and political organization originating in Lebanon's Shiite population, was established in the 1980s. The group has been fighting alongside the Syrian government against the Sunni radicals and other militant groups, such as the Islamic State (ISIL), which is prohibited in many countries, since 2011.