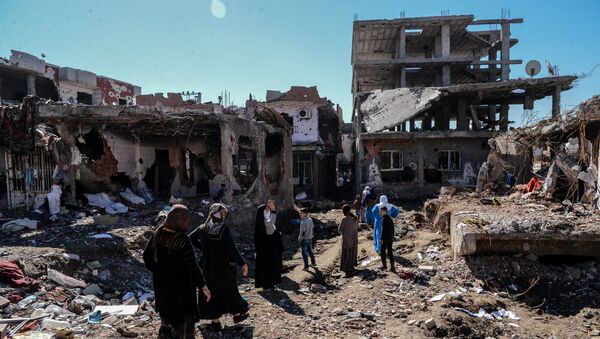 One Turkish serviceman and 28 Kurdish militants died in the past 24 hours in the conflict that has been raging in Turkey’s Kurdish-dominated southeast since summer, the country’s General Staff said Sunday.

ANKARA (Sputnik) — The standoff between the Turkish government and the Kurdistan Workers’ Party (PKK) began last summer after a ceasefire broke down. PKK has been fighting for Kurdish independence from Ankara since 1984. The group, which Turkey considers to be a terrorist organization, seeks to create a Kurdish state in parts of Turkey and Iraq.

"Today, our brother-in-arms was gravely wounded in fight with members of a separatist terrorist group in Sirnak and succumbed to his injuries in hospital," the General Staff of the Turkish Armed Forces said in a statement.

It added that 13 "terrorists" were wiped out in Sirnak, nine in Nusaybin and six in Yuksekova, all Kurdish-populated cities in the southeast of Turkey where the military imposed a round-the-clock curfew earlier on Sunday.