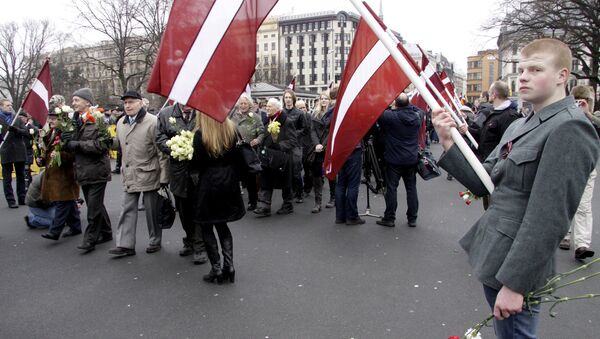 © Sputnik / Oksana Dzhadan
/
Go to the mediabank
Subscribe
International
India
Africa
Activists and former members of the Latvian Legion of the Waffen SS marched through Riga as part of their annual commemoration of members of the unit who lost their lives fighting on the Nazi German side during World War II.

Former members of the Latvian Legion of the Waffen SS on Wednesday gathered for an annual march through Riga to commemorate members of the unit killed during World War II, the Delfi news portal reported.

According to the news outlet, the number of clashes that happen during the march has reduced in recent years but nevertheless remains high.

The annual parade has become a cause for harsh criticism from a number of international anti-fascist organizations as well as of governments worldwide.

SS, as well as other Nazi organizations, such as Gestapo, SD and SA, were outlawed following the Nuremberg trials.