Who's Next? Top Malaysian Leadership on Daesh Terrorisrs Kidnap List 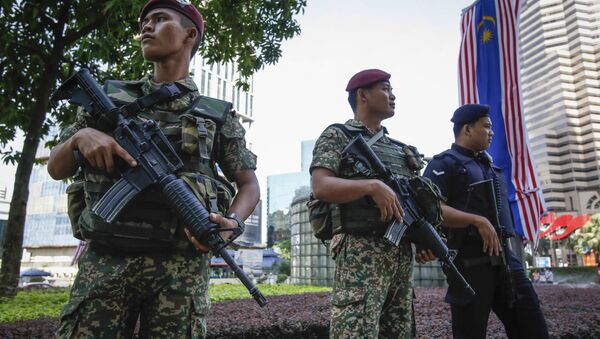 MOSCOW (Sputnik) – The Daesh terrorists have sought to kidnap the top leadership of Malaysia, including the prime minister, the country's Deputy Prime Minister and Home Minister Zahid Hamidi said Tuesday.

"On Jan 30, 2015, a total of 13 people with ties to Daesh had planned to kidnap the leaders, including the Prime Minister (Najib), Home Minister (Zahid) and Defence Minister (Hishamuddin Hussein)," Hamidi said at the lower house of the Malaysian parliament, as quoted by The Star Online newspaper.

Malaysia Keeps Vigilant as Daesh Threaten Revenge for Anti-Terror Campaign
According to the minister, the police managed to prevent four Daesh attacks in Malaysia.

Considerable parts of Syria and Iraq are currently controlled by the Islamic State group, which is outlawed in many countries including Russia. The extremists have declared a caliphate on the territories under their control. The group is considered to be one of the main threats to global security.

Daesh jihadists are trying to expand their influence in North African countries, particularly in Libya and in Southeast Asia.