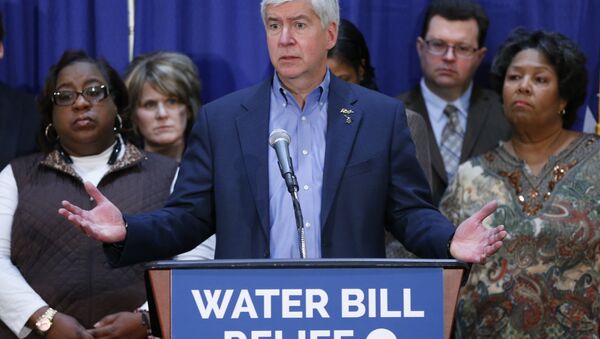 As Hillary Clinton joined Bernie Sanders’ call for Michigan Governor Rick Snyder to resign at Sunday’s democratic debate over the latter’s role in the Flint water crisis, the governor took to Twitter to live tweet his denial.

It has become increasingly likely that Snyder and his administration were aware of the water poisoning as far back as a year before Flint’s supply source was switched back to Detroit water and away from the highly polluted Flint River water. Snyder continues to fully deny his culpability despite email evidence.

Since the scandal broke, activists, residents, and politicians have all been calling for Snyder’s resignation. Last Wednesday, Michigan House Democratic leader Tim Greimel became the first state legislator to join their ranks.

"It's now clear that for over a year the governor's top aides and advisers wrote thousands of emails relating to the Flint situation, and that they held many meetings and had many conversations about Flint," Greimel told MLive. "It is inconceivable that the governor wasn't aware of what was going on. In fact, the governor's own chief of staff came out last week and indicated that he had been keeping the governor informed all along the way."

As Sunday’s democratic debate was broadcast from Flint, Michigan, the poisoning of the city took center stage.

Senator Sanders laid into the governor, stating in no uncertain terms, "I believe that the governor of this state should understand that his dereliction of duty was irresponsible."

“In a few days, political candidates will be leaving Flint and Michigan. They will not be staying to help solve the crisis, but I am committed to the people of Flint. I will fix this crisis and help move Flint forward. Long-term solutions are what the people of Flint need and what I am focused on delivering for them,” Snyder posted to Facebook, responding to Democratic candidates’ calls for his resignation.

He also tweeted, “This was never about money. This was a failure of government at all levels that could be described as a massive error of bureaucracy.”