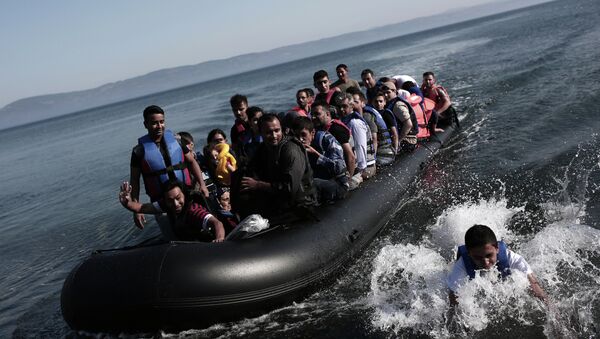 Austrian Chancellor to Refugees: ‘It Makes No Sense to Get on Boat'
MOSCOW (Sputnik) – German naval sailors rescued 121 people from a smuggling boat, the German Federal Defense Forces, known as the Budeswehr, said Sunday.

The “Ludwigshafen am Rhein” corvette responded alongside Spain’s “Numancia” frigate to a distress call early Sunday 20 miles northwest of Tripoli.

The 121 rescued people, seven women among them, have later been handed to the EU’s Frontex external border agency.

In a classified late January report leaked by WikiLeaks on Wednesday, Operation Sophia's commander, Italian Navy Rear Admiral Enrico Credendino, expressed readiness to move to Libyan territorial waters as part of "Phase 2B." Credendino said he was "extremely conscious" that phases 2B and 3 would encompass "a number of other missions providing support to the Libya authorities which will be sponsored by the International Community."

Bundeswehr said the German Navy had rescued 11,874 people from drowning in the southern and central Mediterranean since May 7, 2015.

The International Organization for Migration registered 418 deaths among migrants and refugees crossing the Mediterranean to Greece and Italy this year.