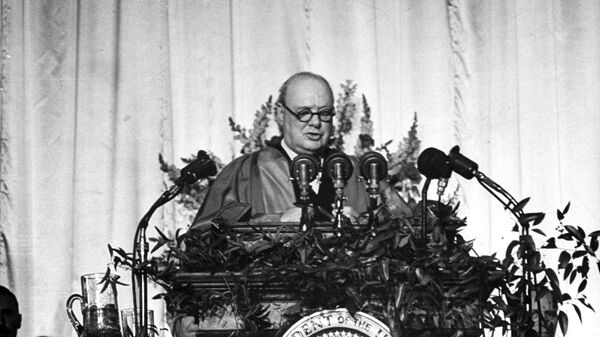 © Photo : photoshare.ru
Subscribe
Ilya Tsukanov
All materialsWrite to the author
March 5th marks the 70th anniversary of Sir Winston Churchill's speech at Westminster College in Fulton, Missouri, considered by many historians to signify the beginning of the Cold War. In a reflective article, Russian historian Dmitri Kosyrev contemplated on the world borne by the speech, and its enduring relevance today.

In his piece, published by RIA Novosti, Kosyrev suggested that "the Cold War generals of today have something in common with Churchill, a theoretician, practitioner, strategist and ideologist of this war," although naturally they cannot match his historical magnitude.

"The 70th anniversary of Winston Churchill's speech at Fulton (March 5, 1946 at Westminster College, Missouri, USA) can certainly be seen as the 'birthday' of the Cold War – that is, of the confrontation between the West and the Soviet Union/Russia. But there is something much more interesting in this speech; namely, it was the proclamation of an ideology and strategy of a new global era, on which the sun is only just now beginning to set."

US Leaders Agree on Seeing Russia as 'Existential Threat' - NATO Commander
"But first, a couple of small details of the larger picture: The term 'Cold War' was not Churchill's creation, but that of his fellow countryman, writer George Orwell, who first used it in 1945. With these words, the author outlined the future state of relations between countries which would acquire nuclear weapons, but remain afraid to use them. Soon, he would accuse the USSR of beginning such a war against Britain and the United States. Gradually, the term would take root. However, at Fulton, it did not yet exist."

"Instead," Kosyrev explains, "it would be there that the term 'Iron Curtain' would find its first use. And it was not Churchill offering to erect it in front of the Soviets; he believed that Moscow had already done so, thus partioning Europe."

"Taken as a starting point for the beginning of the confrontation between the former allies, it could be said that the speech was chosen arbitrarily –there might have been other pretexts or speeches before it. But the fact is that Churchill was a great strategist, speaker and writer, and although he was no longer the leader of Britain at the time, his thoughts and his words carried weight in and of themselves. Especially given the fact that at Fulton, he was accompanied by US President Harry Truman."

Five Great Victories of Russian Geopolitik, From Napoleon to Crimea 2014
"And so, 1946: why did the retired politician decide to come down on the Soviet Union, and more importantly, why does his speech remain unforgotten to this day? The answer is that Churchill wasn't speaking only strictly about the Soviet Union. He was laying out his vision of the world that he felt needed to be built following the Second World War – the world as a whole. He took to goal setting, and on a truly global scale."

"Most importantly, he was heard, and the world which he proposed began to be built. In world history it is a rare case when one person can formulate the direction in which so many people and countries will then follow for so many decades."

"Churchill's speech sounded amid ideological confusion, fatigue and vacillation, the cause of which he eloquently described. The post-war devastation, ration cards (including in the UK), communists coming to power across Europe, in half of the latter under the direct influence of the USSR."

The former prime minister, Kosyrev suggested, answered important questions for the Western world, including 'Where will we go? 'What kind of a world do we want?' And most importantly, 'Who are 'we'?'"

"The essence of the speech lies in the answer to the last question. At the beginning of the speech, Churchill clearly identified what not every Briton was willing to say out loud; namely, that 'the United States stands at this time at the pinnacle of world power.' Before the war, the sole superpower was the British Empire, an empire which he would lead. The balance of global power had changed, and this was proclaimed in Fulton."

Why Didn't Washington Dissolve NATO After Collapse of USSR?
"But from this shift, from his own country's disaster, Churchill made a conclusion: 'opportunity is here and now, clear and shining for both our countries.' And not only for them, but for the 'English-speaking peoples'; that is, the former dominions of the British Crown – Canada, Australia, New Zealand."

"That's what was said in Fulton – the need for not just an alliance between the United States and the United Kingdom, as in the days of the war, but for the strengthening of Anglo-Saxon unity, and not for the creation of a US-European 'Atlantic' partnership…And in this, Churchill's successors were successful, although this concept was not formalized by any explicit agreement."

In Russian, "this idea even has a contemporary nickname, borne of a high-ranking diplomat, who remains nameless: 'Naglo-Saxons' [the word 'nagliy' means 'brazen' or 'brash' in Russian]."

"Several days after Fulton, Churchill received a response from [Soviet leader] Joseph Stalin. In an interview for Pravda, Stalin took great notice of the 'Anglophone' idea of his sworn partner at Tehran, Yalta and Potsdam."

Asked whether Churchill's speech had caused harm to the cause of global peace and security, Stalin replied: "Certainly. The essence of the affair is that Mr. Churchill now assumes the position of a warmonger. And Mr. Churchill is not alone in this; he has friends not only in England but also in the United States of America."

"It should be noted," Stalin continued, "that Mr. Churchill and his friends strikingly recall in this respect Hitler and his friends. Hitler began the task of unleashing war by proclaiming the racial theory, declaring that only people who spoke the German language constituted a full-fledged nation. Mr. Churchill, too, has begun the task of unleashing war with a racial theory, stating that only nations that speak the English language are full-fledged nations that are called upon to rule the destinies of the world world…In essence Mr. Churchill and his friends in England and the USA have presented the non-English-speaking nations with something like an ultimatum: recognize our dominance voluntarily and then all will be in order; in the contrary case, war is inevitable."

Released US Nuclear Plans Show Soviet Deterrent Saved Europe
Stalin, Kosyrev noted, "described the weakness of Churchill's position very accurately. But the Fulton speech compensated for it by clearly proclaiming not just the ideological basis of the confrontation with the communist Soviet Union, but also a moral and values-based 'exceptionalism' of the English-speaking nations against everyone else."

"And this is what we continue to hear from them to this day, although communism in our country is long gone; today, this 'excpetionalism' is now called 'universal values'…And the current unenviable fate of Europe, including the Transatlantic Partnership, written according to American standards, all comes from there – from the Fulton speech."

"Through the eyes of someone living in 2016, Churchill's idea may seem mad. But in 1946, everything was logical. The nuclear monopoly of the United States plus the joint use of British naval and air bases all across the globe. And, the USSR excepted, there were no competitors."

"Relations between London and Washington had their ups and downs, but in general, through the past 70 years, they really did build 'the world according to Churchill'. And today, we are living in the sunset of this era."

Gorbachev: 7 Things You May Not Know About the Last Soviet Leader
"In 1946 of course, Sir Winston could not have known that the world would be so different; China then was in ruins; India was still a part of the British Empire; Africa consisted almost exclusively of colonies. Not to mention the impending end of the American nuclear monopoly. But in spite of the changes, Churchill and those inspired by his ideology tried very hard, and even only 15 years ago it may have seemed that the goals he had set had been successfully realized."

"And finally: Winston Churchill stands at the very top of the pyramid of the historical haters of Russia – as a theorist and practitioner, as a strategist and ideologist. It is possible and necessary to say whatever one likes about him, but he was a figure of immense historical magnitude, including thanks to the Fulton speech."

"And today…Who do we have today that lives by the symbols of the Cold War? Perhaps the commander of NATO forces in Europe, General Philip Breedlove? Let's take a listen: 'Russia does not want to challenge the agreed rules of the international order. It wants to rewrite them'; 'Russia has chosen to be an adversary and poses a long-term existential threat to the United States and to our European allies and partners'; 'Russia and the Assad regime are deliberately weaponizing migration from Syria in an attempt to overwhelm European structures and break European resolve'; the US and its allies are 'preparing to fight and win if necessary' against Russia.'"

"Perhaps there's something Churchillian in these words, but Breedlove is no Churchill," Kosyrev concludes.