Erdogan's Worst Nightmare: Could Kurds Redraw the Map of the Middle East? 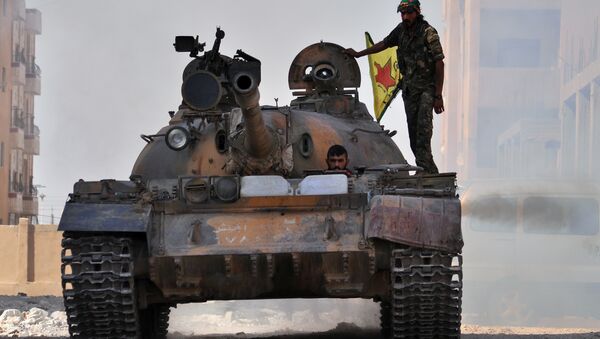 © AFP 2022 / DELIL SOULEIMAN
Subscribe
The Kurds, often referred to as the largest ethnic group without a state, have become the first ground force to shatter the myth that Daesh was unstoppable and invincible. Their success on the Iraqi and Syrian battlefields has fueled fears, particularly in Turkey, that the Kurds would try to establish an independent state, but do they want it?

The Syrian Kurds are unlikely to push for greater autonomy since they are scattered all over the country, analyst Stanislav Ivanov told RT.

"They would agree to equal rights and freedoms with Syria's Arab population, proportional representation in the [post-war] institutions and the so-called cultural autonomy," he asserted.

In February, Saleh Muslim, co-chairman of the Democratic Union Party (PYD), reiterated that the PYD was not trying to create an independent political entity in northern Syria and only champions constitutional rights for the Kurds.

"We do not want an independent Kurdish state neighboring Turkey," he asserted, adding that Turkey's claims to the contrary show that Ankara is "Kurdophobic." 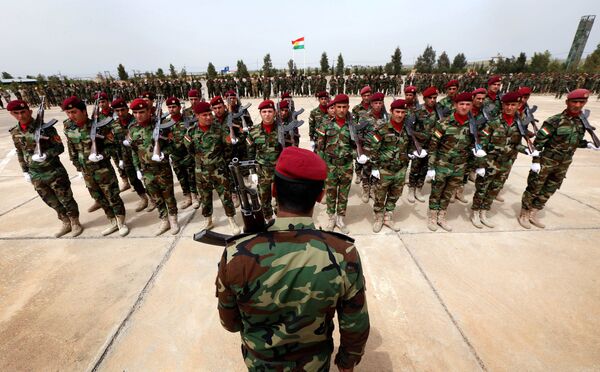 Kurdish Peshmerga fighters take part in a graduation ceremony on April 16, 2015 at the Kurdistan Training Coordination Center (KTTC) of Arbil, the capital of the autonomous Kurdish region of northern Iraq.
© AFP 2022 / Safin Hamed

Daesh Gathering Forces in Syria’s Raqqa Province to Attack Kurds
The Iraqi Kurds have a high degree of autonomy and are well-represented in federal institutions. Jalal Talabani, the founder of one of the leading Kurdish political parties, the Patriotic Union of Kurdistan (PUK), served as Iraq's president from 2005 until 2014.

The Kurdish language is one of the two official languages in the country. Iraqi Kurdistan receives 17 percent of the national budget and is as sovereign as a political entity could be without formally seceding, but experts say that Erbil in fact wants Iraq to remain undivided. Turkish soldiers patrol in Sur district, which is partially under curfew, in the Kurdish-dominated southeastern city of Diyarbakir
© REUTERS / Sertac Kayar

Turkey's 'Hidden War' Against Kurds May Be Deadlier Than Syria
Ankara's relationship with its Kurdish minority dramatically differs from Baghdad and Damascus. For their part, the Turkish authorities have never acknowledged that the Kurds have rights, Khaled Issa, the PYD representative in France, told RT.

Ankara "views anyone who is advocating for their rights terrorists. At the moment, the Turkish government is waging a war against those people who do not want to call themselves Turks and live primarily in Kurdish areas of Turkey," he noted.

In 2015, the Turkish government launched a military operation against the Kurdistan Workers' Party (PKK) after a months-long ceasefire collapsed. The campaign has largely been condemned as a humanitarian disaster. 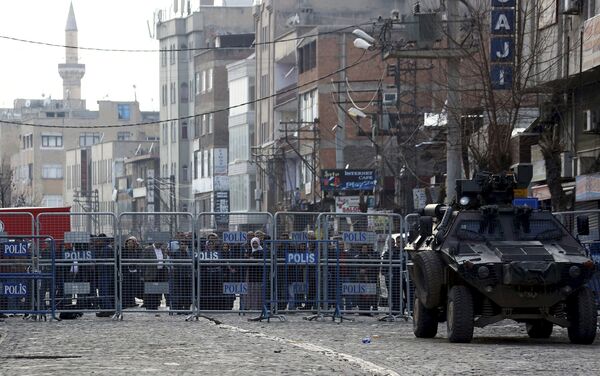 People stand behind the security barriers at one of the entrance of Sur district, which is partially under curfew, in the Kurdish-dominated southeastern city of Diyarbakir, Turkey February 26, 2016
© REUTERS / Sertac Kayar
Newsfeed
0
New firstOld first
loader
LIVE
Заголовок открываемого материала
Access to the chat has been blocked for violating the rules . You will be able to participate again through:∞. If you do not agree with the blocking, please use the feedback form
The discussion is closed. You can participate in the discussion within 24 hours after the publication of the article.
To participate in the discussion
log in or register
loader
Chats
Заголовок открываемого материала
Worldwide
InternationalEnglishEnglishMundoEspañolSpanish
Europe
DeutschlandDeutschGermanFranceFrançaisFrenchΕλλάδαΕλληνικάGreekItaliaItalianoItalianČeská republikaČeštinaCzechPolskaPolskiPolishСрбиjаСрпскиSerbianLatvijaLatviešuLatvianLietuvaLietuviųLithuanianMoldovaMoldoveneascăMoldavianБеларусьБеларускiBelarusian
Transcaucasia
ԱրմենիաՀայերենArmenianАҧсныАҧсышәалаAbkhazХуссар ИрыстонИронауОssetianსაქართველოქართულიGeorgianAzərbaycanАzərbaycancaAzerbaijani
Middle East
Sputnik عربيArabicArabicTürkiyeTürkçeTurkishSputnik ایرانPersianPersianSputnik افغانستانDariDari
Central Asia
ҚазақстанҚазақ тіліKazakhКыргызстанКыргызчаKyrgyzOʻzbekistonЎзбекчаUzbekТоҷикистонТоҷикӣTajik
East & Southeast Asia
Việt NamTiếng ViệtVietnamese日本日本語Japanese中国中文Chinese
South America
BrasilPortuguêsPortuguese