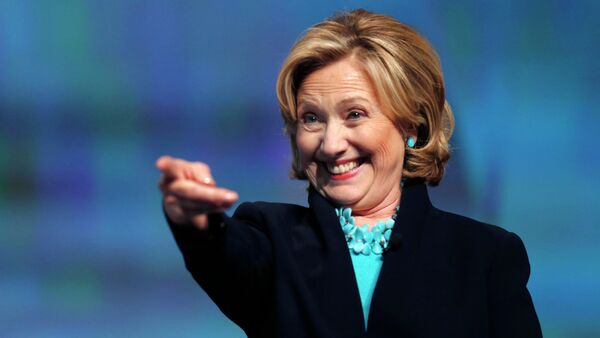 © AP Photo / Elise Amendola
Subscribe
International
India
Africa
With billionaire Donald Trump’s improbable lead in the Republican primaries and Democratic rival Bernie Sanders hot on her heels, former Secretary of State Hillary Clinton may be trying to cash in on the popularity of the recent X-Files reboot by promising to release classified UFO documents.

Politicians often make outlandish promises they have no intention of keeping. Newt Gingrich pledged to build a moon base by 2020 (even as he planned to cut funding to NASA), and Herman Cain vowed to veto any bill longer than three pages, no matter how nuanced the topic.

Desperate to clinch her 2016 nomination, Democratic frontrunner Hillary Clinton appears to be pandering to conspiracy-minded voters. Speaking with KLAS-TV this week, her campaign manager John Podesta confirmed that "the UFO question has been discussed."

"I’ve talked to Hillary about that. There are still classified files that could be declassified," he said.

"I think I’ve convinced her that we need an effort to kind of go look at that and declassify as much as we can, so that people have their legitimate questions answered. More attention and more discussion about unexplained aerial phenomena can happen without people – who are in public life, who are serious about this – being ridiculed."

Clinton hinted at this proposal in January. Speaking to The Conway Daily Sun, she said she would "get to the bottom" of the UFO question.

"I think we may have been [visited already]. We don’t know for sure," she said, saying that Podesta had sparked her interest in extraterrestrials.

"He has made me personally pledge we are going to get the information out," she said. "One way or another. Maybe we could have, like, a task force to go to Area 51."

If Clinton does, in fact, manage to uncover a "truth" about extraterrestrial visitation, she will have succeeded where husband, former President Bill Clinton, failed.

"I did attempt to find out if there were any secret government documents that reveal things, and if there were, they were concealed from me, too. I wouldn’t be the first president that underlings have lied to or that career bureaucrats have waited out," he said during a 2005 speech in Hong Kong.

"But there may be some career person sitting around somewhere hiding these dark secrets, even from elected presidents.  But, if so, they successfully eluded me, and I’m almost embarrassed to tell you I did try to find out."

Bill Clinton may have also been inspired by Podesta, who served as his White House chief of staff. Before serving on Hillary Clinton’s campaign, Podesta spent a year as a senior advisor to President Barack Obama. Of that time, his greatest regret was "not securing the disclosure of the UFO files."

The truth is out there, and if you want to find out what it is, you have only one choice: Vote Klingon…er, I mean, Clinton!