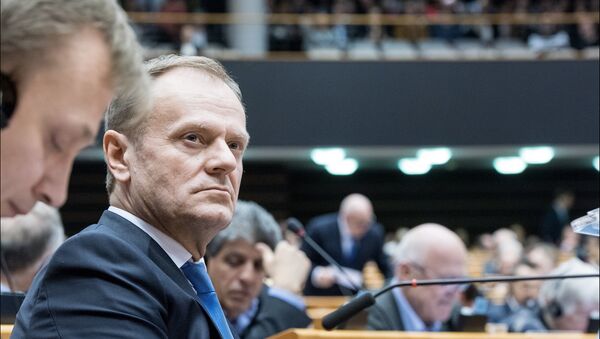 © Flickr / European Parliament
Subscribe
Lawmakers in the European Parliament Tuesday declared a "State of Emergency" over the refugee crisis as riots broke out for the second day running on the Greece-Macedonia border and at the "Jungle" in Calais, as authorities moved in the close down the camp.

The news comes as European Council President Donald Tusk begins a week of slogging round Europe to try to reach some sort of consensus on how to deal with the crisis ahead of crucial summit next week. He will travel to Vienna, Ljubljana, Zagreb, Skopje and Athens from March 1-3 to continue building a European consensus on how to handle the migration crisis and to prepare for the summit with Turkey on 7 March and the European Council on 17-18 March.

In a sign of increasing division within Europe over the crisis, lawmakers in the Alliance of Liberals and Democrats for Europe (ALDE) group issued a statement saying:

"All policies to get a grip on the refugee crisis have so far failed. The Dublin Regulation [processing migrants where they land in Europe] has proved to be unsustainable, the agreed relocation mechanism is not applied by the Member States, the deal with Turkey has not shown any results yet and the situation of the refugees in many camps is appalling.

"Furthermore, no decisions have been taken on the setting up of a European Border and Coast Guard, a European Blue Card for legal migration or a joint European asylum approach. The only solutions Member States have shown so far is closing their borders, deterrent tactics to discourage the refugees and installing national refugee quotas," the ALDE statement read.

It is time that the Member States stop pointing their fingers at each other and start to cooperate to tackle the refugee crisis. This is what they have to do.

Posted by ALDE Group – Liberals and Democrats in the European Parliament on Sunday, February 28, 2016

Fights broke out Monday on the Macedonia-Greek border after several hundred men stormed one of the border gates, prompting security force to fire tear gas. Meanwhile, there were similar demonstration in Calais as the French authorities moved in to demolish the so-called "Jungle" camp near Calais.

'Stranded on the Shores of Greece'

The ALDE lawmakers says the projected figures for the upcoming spring and summer months are "alarming."

Building fences & burying our heads in the sand will not provide sustainable solutions to #refugeecrisis —more via https://t.co/N1WybUhbiK

"Almost 37,000 people arrived in Italy and Greece in the first 21 days of this year, 10 times more than the same period in 2014. Of those, 36,000 arrived on the Greek islands alone. The European project is stranded on the shores of Greece," that said.

The lawmakers are calling for the creation of a European Rapid Refugee Emergency Force (ERREF).

"The European borders are a Swiss cheese. Therefore, the priority for this year should be the upgrading of Frontex to a full-fledged European Border and Coast Guard," the lawmakers said.

They also warned that the EU deal to pay Turkey US$3.35 billion to secure its border with Bulgaria and Greece — the subject of much acrimony ahead of the summit next week — is not working.

"The deal concluded with Turkey has not reduced the number of people crossing the border. Unfortunately, negotiations with Turkey are difficult and the EU has put itself in a vulnerable situation open to blackmail. Moreover, Member States have as yet not agreed who will pay the three billion euros and how it will be spent," the lawmakers said.

They said the US$3.35 billion would be better spent being given directly to the migrants in Turkey and for them then to be dealt with by the UN refugee agency UNHCR.