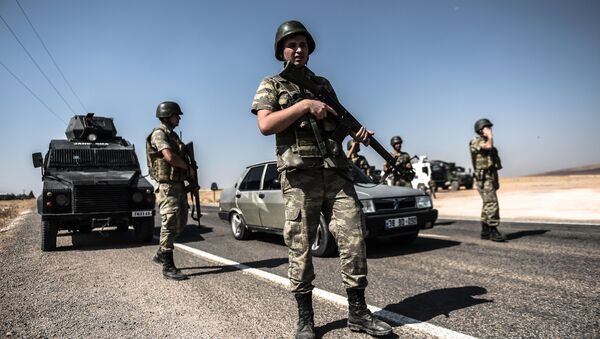 © AFP 2021 / OZAN KOSE
Subscribe
Equating Kurds to Daesh and backing Syrian rebel groups such as Ahrar al-Sham, not bound by the ceasefire and considered terrorist by parties to Syrian peace talks, Turkey created a difficult situation, in which ceasefire implementation is difficult to judge.

The upcoming Syrian ceasefire could be difficult to hold because of the convoluted balance of forces in the region and neighbor Turkey's positions on the conflict.

Turkey does not believe that the ceasefire should apply to Syrian Kurds, whom it considers a "terrorist" organization. The arrangement of forces in Syria also poses a danger to the ceasefire, according to Turkish People's Republican Party (CHP) deputy foreign affairs chief Öztürk Yılmaz.

"For example, currently al-Nusra Front fighters control Idlib [province]. If military operations against them will continue and the opposition opposes this, it would mean another failure, or at least slippage in the negotiation process," Yılmaz told Sputnik Turkiye.

Syria Peace Deal: ‘Ceasefire Does Not Come With One Turn of a Switch’
The US now has closer coordination with Russia than it does with Turkey, Yılmaz added, as the negotiations enter a difficult stage. Turkey currently bombs Kurdish forces in Syria, which the US backs as part of the Syrian Democratic Forces (SDF), in a complex situation where various US-backed forces are fighting each other.

"We hold our original position that the Democratic Union Party [PYD] and the Kurdish self-defense forces [YPG] are terrorist organizations. We make no distinction between them and Daesh," Kaya told Sputnik Turkiye.

In this situation, Kurds and their allies around northern Aleppo province's Afrin could become the chief force fighting the terrorist al-Nusra Front and its Syrian rebel allies.

The ceasefire, which has a condition that sides cannot use the cease of hostilities to strengthen themselves, could also be broken by Turkey, which has openly supplied rebels in northern Syria in the past several days.

000000
Popular comments
"We hold our original position that the Democratic Union Party [PYD] and the Kurdish self-defense forces [YPG] are terrorist organizations. We make no distinction between them and Daesh," Kaya told Sputnik Turkiye. ... except Daesh were good, business partners with us, while we were both able to pillage Iraqi oil.
pbecke
26 February 2016, 14:54 GMT1
000000
If Turkey is not going to abide with the rest of NATO, then throw them out. The End.