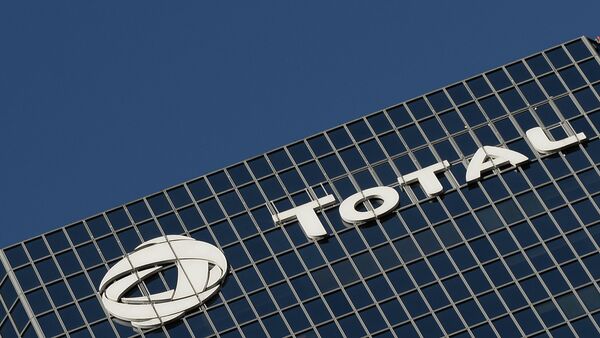 © Sputnik / Alexey Filippov
/
Go to the photo bank
Subscribe
Total’s president of refining and chemicals Philippe Sauquet said that the operations of France’s Total oil and gas company in Russia have not been affected by the current low oil prices.

Iran’s Oil Deal With French Firm Total Not Finalized – Source
HOUSTON (Sputnik) – The operations of France’s Total oil and gas company in Russia have not been affected by the current low oil prices, Total’s president of refining and chemicals Philippe Sauquet told Sputnik on the sidelines the IHS CERAWeek energy conference in Houston, Texas.

"In Russia there is no impact whatsoever. We have the Yamal LNG under construction so we are not of course affected by the oil price of today, but we’ll see what will be the oil price, what we will produce – and we produce gas," Sauquet said.

Global oil prices dropped from $115 to less than $30 per barrel between June 2014 and January 2016, hitting their lowest levels since 2003, largely because of prolonged global oversupply and weak demand.

To address the issue of declining revenues, Russia, Saudi Arabia, Qatar and Venezuela held talks on February 16 in the Qatari capital of Doha, and agreed to freeze output at the January levels if other countries followed suit.

The proposal was later backed by Ecuador, Algeria, Nigeria and Oman.

"The oil price of course has led us to reconsider a number of investments… We want to focus our investment on the most competitive project that we can think of," Sauquet said.

Total's president predicted that the project could be located in the Middle East or Russia.

"We’ll go for the best project with the best costs, the best performance that we can anticipate and there is plenty of room for competition just to find such a project in Middle East, but Russia might be one of its place," Sauquet told Sputnik.

Total's business in Russia has been hampered by western economic sanctions, but the French energy giant has continued its participation in joint projects despite the difficulties.

Philippe Sauquet also noted that the propriety for French Total oil and gas company in Russia is to make the Yamal liquefied natural gas (LNG) project a success.

Total’s CEO Says French Gas Giant to Mull Iran's Comeback After Sanctions
"For the time being I can tell you that Yamal is one of the most emblematic projects that we have in Total, and also in the industry, so our clear priority is to make the Yamal a success," Sauquet said. "If Yamal is a success we will see later on. Yamal is really focusing all of our efforts in Russia right now for the short term."

Sauquet emphasized that they are currently actively working on the Yamal LNG project, adding, however, that there are some challenges that are likely to be solved this year.

"The partnership that we have with Novatek Russian partner and CNPC which is Chinese party to the venture is very effective and very successful. The challenge in fact to agree on financing, this is the challenge for 2016, but we are confident we will overcome this challenge," he explained.

One of the largest industrial undertakings in the Russian Arctic, the Yamal LNG project is expected to have an annual capacity of 16.5 million metric tons of gas, much of which is to be supplied to China. Russia’s Novatek gas company is said to own 60 percent equity stake in the project, with China’s CNPC and France’s Total at 20 percent each.

000000
Popular comments
Wait WHAT? WHY TOTAL lining it's pockets in Russia? While Russia couldn't get 2 barges, called MISTRAL? Someone is VERY CROOKED in Russia. I would had send them all packing and nationalize all energy. they can cry wolf all they wish. they will anyways. No wonder they say that Ukraine coup is Russia's fault and even Syrian mess. Russia let them have all they want. And they get rich and use it for coups and arming civilians to kill and destroy legit governments. Kill police, teachers, doctors then use the press to say it was Russia. "OUR PARTNERS".
cast235
25 February 2016, 06:33 GMT
000000
Newsfeed
0
New firstOld first
loader
LIVE
Заголовок открываемого материала
Access to the chat has been blocked for violating the rules . You will be able to participate again through:∞. If you do not agree with the blocking, please use the feedback form
The discussion is closed. You can participate in the discussion within 24 hours after the publication of the article.
To participate in the discussion
log in or register
loader
Chats
Заголовок открываемого материала
Worldwide
InternationalEnglishEnglishMundoEspañolSpanish
Europe
DeutschlandDeutschGermanFranceFrançaisFrenchΕλλάδαΕλληνικάGreekItaliaItalianoItalianČeská republikaČeštinaCzechPolskaPolskiPolishСрбиjаСрпскиSerbianLatvijaLatviešuLatvianLietuvaLietuviųLithuanianMoldovaMoldoveneascăMoldavianБеларусьБеларускiBelarusian
Transcaucasia
ԱրմենիաՀայերենArmenianАҧсныАҧсышәалаAbkhazХуссар ИрыстонИронауОssetianსაქართველოქართულიGeorgianAzərbaycanАzərbaycancaAzerbaijani
Middle East
Sputnik عربيArabicArabicTürkiyeTürkçeTurkishSputnik ایرانPersianPersianSputnik افغانستانDariDari
Central Asia
ҚазақстанҚазақ тіліKazakhКыргызстанКыргызчаKyrgyzOʻzbekistonЎзбекчаUzbekТоҷикистонТоҷикӣTajik
East & Southeast Asia
Việt NamTiếng ViệtVietnamese日本日本語Japanese俄罗斯卫星通讯社中文（简体）Chinese (simplified)俄罗斯卫星通讯社中文（繁体）Chinese (traditional)
South America
BrasilPortuguêsPortuguese
NewsfeedBreaking
15:36 GMTUK TV, Radio Could Get Into Trouble for Using Terms "Karen", "Snowflake" & "Gammon"
15:33 GMTNATO Partners Agree to Revise Alliance's Concept, French Defence Minister Says
15:23 GMTBiden Says US Launching Vaccine Partnership With EU to Expand Global Vaccination
15:22 GMTBiden Hosts Virtual Summit on COVID-19 Pandemic
15:20 GMTGravitational Waves or Cosmic Rays? Strange Signals Reportedly Picked Up by 'Tabletop Detector'
15:02 GMTUnited Nations General Assembly 76th Session: Day Two
14:43 GMTMoscow: Washington Manipulates Visas to Put Pressure on Other Countries
14:28 GMTReverse Psychology: Fake Funeral Home in US Promoted Vaccine Shots
14:27 GMTGerman Government Says Unaware Who Sponsored Navalny's Accommodation in Germany
14:26 GMTMan Accused of Plotting to ‘Topple UK Government’ to Stop ‘Communist System’ Faces Trial in 2022
14:26 GMTUK Recognises Covishield, Falls Short of Validating India's Vaccine Certificates
14:02 GMTUK Foreign Secretary Hopes Russia, China Will ‘Act as One’ in Engaging With Taliban
14:01 GMTUS Assures EU of Solidarity in Seeking 'Solid' Gas Supply in Winter
13:34 GMTXi Jinping Vows China Will Never ‘Invade or Bully’ States, Calls to Reject ‘Zero-Sum Games’
13:08 GMTNuclear Power, Food and Other Industries Affected by UK CO2 Shortage, Which is Spilling into Europe
13:08 GMTZelenskyy's Aide Shefir Says Assassination Attempt on Him Aimed at Intimidating Government
12:58 GMTMerkel, Kramp-Karrenbauer Pay Tribute to German Soldiers Who Participated in Afghanistan Evacuation
12:48 GMTPakistan to Keep Sending Aid to Afghanistan, Focus on Humanitarian Mission, Ambassador Says
12:45 GMTGerman Energy Ministry Believes Russia Fulfilling Gas Supplies Obligations
12:25 GMTOne Cable to Rule Them All: EU to Demand Use of Common Charger for Smartphones by 2024