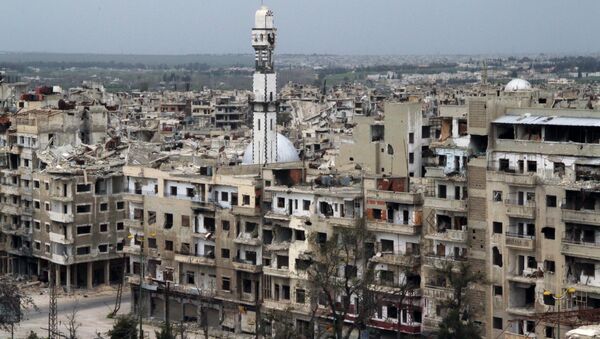 Putting an end to the hostilities in Syria could pave the way for stabilizing and healing Syria, the deputy executive secretary of the UN Economic and Social Commission for Western Asia (ESCWA) told Sputnik on Thursday.

MOSCOW(Sputnik), Daria Chernyshova – Earlier this week, Moscow and Washington announced a plan for the cessation of hostilities in Syria, set to come into effect at midnight Damascus time on February 27.

"With the secession of hostilities, there is a possibility for the international community also to work together towards starting some stabilization, some early recovery and from there move to reconstruction," Abdallah Dardari said.

Dardari, who was Syria’s deputy prime minister for economic affairs until the 2011 conflict broke out, said there were a lot of plans for restoring the war-torn nation "and we need to work together to achieve that," he said.

Russia-US Ceasefire Plan for Syria May Help Israel-Palestine Peace Process
An estimated $180 billion in investment funds will be needed in the next decade to restore Syria to pre-war economic levels and its 2010 gross domestic product, according to the UN economic official.

"That is a very big ‘if.’ There are challenges not only to find the money, but also how to spend it – how you define priorities, who decides the priorities and do we have the right institutions," Dardari noted.

The Syrian government and the main opposition faction said they supported the ceasefire proposal. The initiative does not include the two main Islamist groups in the region, Daesh and the Nusra Front, which are banned in a number of countries, including the United States and Russia.