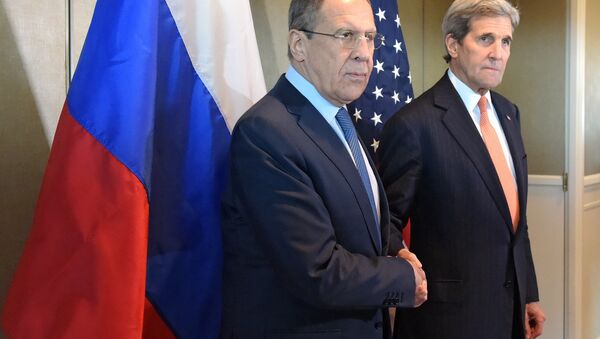 No Ceasefire in Syria Until 'Turks, Saudis & US Try to Achieve Own Goals'
MOSCOW (Sputnik) — Russian Foreign Minister Sergei Lavrov and US State Secretary John Kerry in a telephone conversation continued to discuss the modalities for the cessation of hostilities in Syria, the Russian Foreign Ministry said in a statement Sunday.

"The foreign ministers as co-chairs of the International Syrian Support Group (ISSG) and in accordance with its February 12 decisions continued coordination of modalities and conditions for the cessation of hostilities in Syria except operations against organizations recognized as terrorist by the UN Security Council," the statement issued by the ministry following the Sunday phone conversation of the two top diplomats reads.

At the same time, Secretary of State John Kerry noted that he and his Russian counterpart Sergei Lavrov have reached a provisional agreement on terms of a cessation of hostilities in Syria, indicating there are still unresolved issues.

"We have reached a provisional agreement in principle on the terms of a cessation of hostilities that could begin in the coming days," Kerry said as quoted by Reuters.

Kerry added there was hope that Barack Obama and Vladimir Putin would be speaking in the coming days in order to complete the provisional agreement in principle, and that the two sides are "still filling out the details".