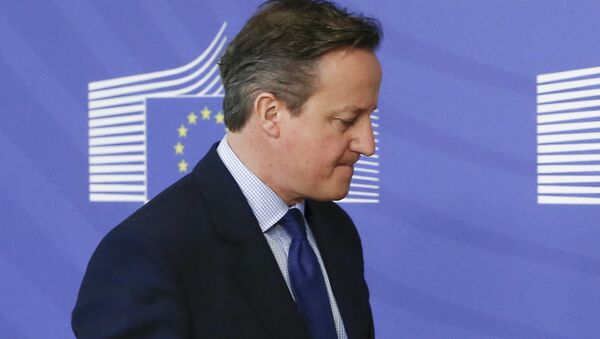 The new deal reached between the European Union and the United Kingdom on the terms of Britain’s membership in the bloc addresses all of British Prime Minister David Cameron’s reform concerns, European Council President Donald Tusk said.

BRUSSELS (Sputnik) – EU leaders met in Brussels on February 18-19 to discuss the United Kingdom’s future in the European Union. On the second day of the summit, an agreement on Britain’s EU reform proposals was reached.

"The settlement addresses all of Prime Minister Cameron’s concerns, without compromising our fundamental values," Tusk said at a press conference on Friday.

Meanwhile Cameron said in an address after the Friday agreement that it is in line with the reforms he had been striving to achieve.

"The United Kingdom needs Europe and Europe needs the United Kingdom," Tusk emphasized, adding that to break the link would be against mutual interests, but the final decision is in the hands of the British people.

Cameron pledged to hold a referendum on the issue of Britain’s EU membership as part of his party’s campaign during the general elections in May 2015.

Ahead of the vote, Cameron was seeking to revise the terms of his country's membership in the bloc having outlined a number of reform demands to Brussels.

President of the European Commission Jean-Claude Juncker said at a press conference on Friday that the deal reached with the United Kingdom is a "fair one."

Cameron will present the deal to the Cabinet on Saturday and will announce the date of the referendum on UK membership in the European Union soon after that.