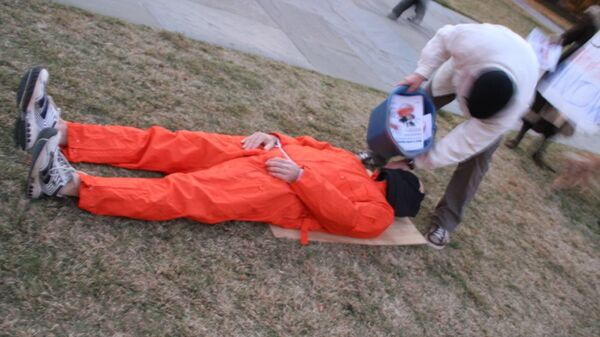 A Texas couple was arrested on suspicion of torturing their teenage son as a form of punishment for inappropriate behavior.

The couple’s 13-year-old son says they pinned him down and put a towel over his face before waterboarding him, according to an affidavit by Kaufman County Police. The child also says the couple tied a rope around his genitals for about “5 to 10” minutes leaving scarring and bruising.

CIA 'Tortured for Sake of Torture': Whistleblower John Kiriakou to Sputnik
Christi Howell, his mother; and Casey Shackleford,his father, were charged with “felony injury to a child.”

The boy says the couple became angry after he told them he had inappropriately touched the family dog.

Waterboarding is a torture method that simulates drowning. It’s usually performed by placing a towel over someone’s face and pouring water over it. It was used as an enhanced-interrogation technique on terror prisoners by US security officials before it was banned.

“The victim said that he was able to breathe slightly if he moved his head to the side and that kept him from feeling like he was drowning,” the affidavit reads.

The boy also said his father would slap him during the waterboarding session to make sure the child remained conscious.

The couple is being held at Kaufman County Jail.

The boy is in local foster care.