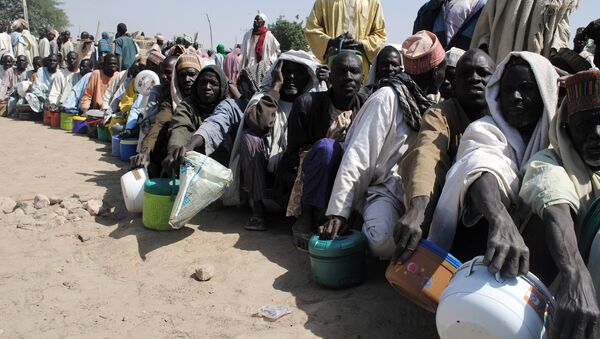 © AFP 2021 / STRINGER
Subscribe
Over 50,000 people in Nigeria’s north-east are at risk of starvation due to the activities of the Boko Haram militant group, the United Nations said in a statement.

More Than 60 Killed in Twin Suicide Bombing Attacks in Northern Nigeria
MOSCOW (Sputnik) – Some areas in the northeastern state of Borno are too dangerous for humanitarian organizations’ employees, who are engaged in the delivery of food to civilians in conflict zones. As a result, almost 54,000 of the state’s residents are in a "catastrophic" situation, according to the Integrated Food Security Phase Classification (IPC) system, The Financial Times newspaper reported Thursday citing the UN report.

Another 780,000 in the same area, as well as in two neighboring states are also living in difficult conditions with the second highest level of food insecurity. Nearly 4 million individuals in the north-eastern Nigeria require food assistance, since they are constantly living in the conflict-torn districts.

Hundreds of thousands fled to the Borno state capital of Maiduguri during the peak of the internal conflict in 2014 and have regularly been provided with aid, since humanitarian services have full access to the Internally Displaced Persons’ (IDPs) camps and settlements. However, those who are not able to move to relatively safe areas are still at a great risk, according to the newspaper.

Northeastern Nigeria has been mired in a conflict since 2009, when the Boko Haram extremist group began large-scale attacks in the region, seeking to impose strict Sharia law.

According to the Global Terrorism Index, Boko Haram became the most deadly terrorist group in the world in 2014. Deaths attributed to the extremists increased by 317 percent in 2014 to 6,644.

000000
Popular comments
Why isn't the coalition of the willing lined up there? The first black president of US is starting to look as white as the ghost of war.