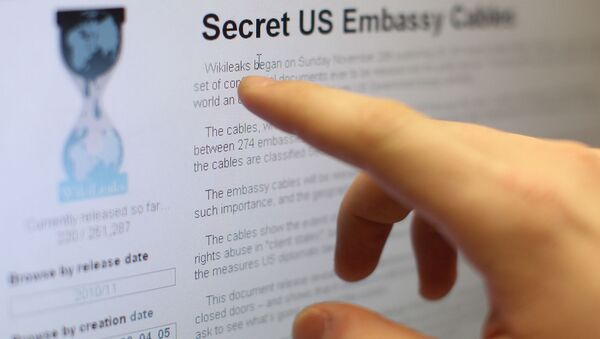 The US gave millions of dollars to a separatist movement in Bolivia and knew of attacks planned by militant opposition groups, according to documents from 2006-2009 obtained by WikiLeaks.

Bolivian Leader Hails Coca Leaf as Partner in Anti-Imperialist Struggle
Documents obtained by WikiLeaks which date back to 2006 reveal that the US was in contact with Bolivian opposition groups and gave millions of dollars to a separatist movement, the Prensa Latina news agency reported on Thursday.

The documents were examined by Norwegian researcher Eirik Vold, who discovered that between 2006 and 2009 the United States Agency for International Development (USAID) gave four million dollars to a separatist movement in the Media Luna (Half Moon) region of Bolivia, Prensa Latina wrote.

The Media Luna is a group of four departments, Santa Cruz, Beni, Pando, and Tarija, in the east of Bolivia, where there were clashes in 2008 between government supporters and opposition groups who wanted control of local resources.

"The US had full knowledge of opposition groups' terrorist plans, and yet did not denounce them," Eirik Vold told Prensa Latina, adding that the US had prior knowledge of a planned attack on a natural gas pipeline, which resulted in a ten percent decrease in Bolivia's in gas exports to Brazil.

Vold said the cables show that Washington also believed that the murder of President Evo Morales was "likely," and that the US was aware of the possibility of a coup d'etat but did not warn the Bolivian government in La Paz.

Looking ‘Beyond South America’: Brazil Hopes to Become True Global Power
The Norwegian, who presented his investigations to the press in La Paz on Thursday, said that WikiLeaks has obtained more than 14,000 US documents about the Bolivian president, which show the extent to which Washington is determined to maintain its hegemony in the region.

The cables "give an understanding of the importance of Bolivia, a country rich in hydrocarbons and other natural resources, to American strategy," Vold said.