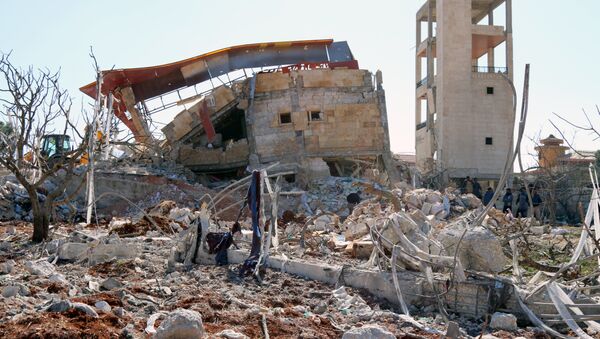 In the Russian Caspian flotilla, there are no ships with the ability to launch a missile strike on a hospital in the Syrian province of Idlib, Russian Defense Ministry spokesman Igor Konashenkov told reporters.

"While visiting Ukraine, Turkish PM Ahmet Dacutoglu accused Russia of striking a hospital in Idlib with a ballistic missile from the Caspian Sea. But we have no any ships in the Casian flotilla which are able to launch such strikes," Konashenkov said.

Kremlin Slams Unacceptable Claims of Russia Behind Strike on Syria Hospital
Earlier in the day, Kremlin has denied allegations that Russia is behind a recent bombings of a hospital in Syria. Kremlin spokesman Dmitry Peskov called these allegations "baseless and unacceptable."

On Monday, the Doctors Without Borders (MSF) said that a hospital in the northwestern Syrian city of Maarat Numan, in the Idlib province, was hit by four rockets. It did not say which of the warring parties was suspected to be behind the deadly attack claiming the lives of at least seven people.

Russia's Defense Ministry spokesman, Maj.-Gen. Igor Konashenkov reminded that Russia's Aerospace forces had launched airstrikes on terrorist targets after repeatedly verifying its reconnaissance data in order to avoid casualties among civilians. Despite this, Turkey and some Western countries continue to accuse Russia of targeting populated areas.

"All strikes against terrorists' targets launched only after repeatedly verifying its reconnaissance data in order to avoid casualties among civilians," Konashenkov noted.

"Once again I remind you that the Russian Armed Forces together with partners launched a multi-level intelligence system that provides reliable Data about the activities of terrorists in Syria and some of its neighbors day and night," he added.

It seems Turkey has launched an information campaign against Russia, the spokesman added.

"Ankara launched an aggressive international media campaign against Russia in order to avoid losing control over northern and north-western Syria, where the Turkish authorities had been the de facto absolute masters in recent years," Russian Ministry of Defense spokesman Major-General Igor Konashenkov told reporters on Tuesday.