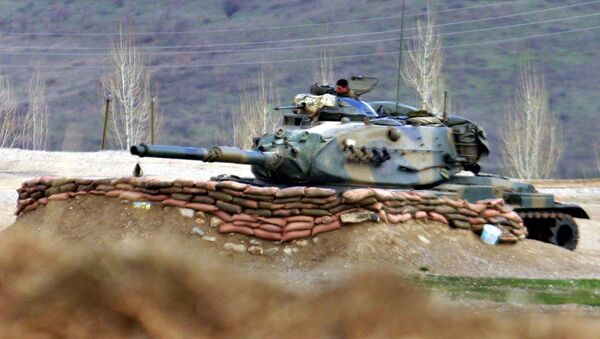 Syrian Kurds, some of whom are part of the PYD active in Northern Syria, are dire enemies of the Turkish government, which sees them as "terrorists" and supporters of the Kurdistan Workers' Party (PKK) in Southeastern Turkey.

At the same time, Syrian Kurds are fighting against Daesh (Islamic State) and Syrian opposition groups, whom Turkey openly backs in their fight against the Syrian government led by President Bashar al-Assad.

"If necessary, we can take the same measures in Syria, as we took in Iraq, in Qandil [the mountain range in Northern Iraq]," Davutoglu said, referencing attacks that Turkish forces carried out against PKK positions in the Qandil region of Iraq in 2015, as cited by Le Figaro.

The Turkish Prime Minister also added that Ankara expects to have the support of its friends and allies.

Turkish forces bombed a village and an airbase that were recently captured by Kurds, Al Mayadeen TV reported Saturday. Prior to being captured by the YPG, the village and the airbase belonged to the al-Nusra Front terrorist organization. This leads to a question whether Ankara was happier when al-Nusra Front controlled the area?

Turkey says the PYD and the YPG are Syrian branches of the PKK, the Kurdish group against which Ankara has been fighting, accusing it of wanting to create an independent Kurdish state on the Turkish territory.

Tensions in Turkey escalated in July 2015, after 33 Kurdish activists were killed in a suicide blast in the town of Suruc on the border with Syria and two Turkish policemen were later murdered by PKK, which led to Ankara's military campaign against the group.

000000
Popular comments
Well mini erdo is losing it..reality must be hard to handle..

Jet fuel can't melt steel beams
14 February 2016, 13:18 GMT3
000000
Mullah Erdogan and the Turks have been caught with their pants down for everybody to see, even the west and we all see their jihadist, neo-ottoman dirty *sses. There are many, among them battle hardened SAA. The Iranians, Hezbollah and various shia groups that are just waiting for the coward "Sultans" to take the first move so they can slaughter them back to their Turkey pariah state, but all we see is talking and grenades lobbed over the border. From here on Mullah Erdogan is on himself and there will be no one to save their faces...