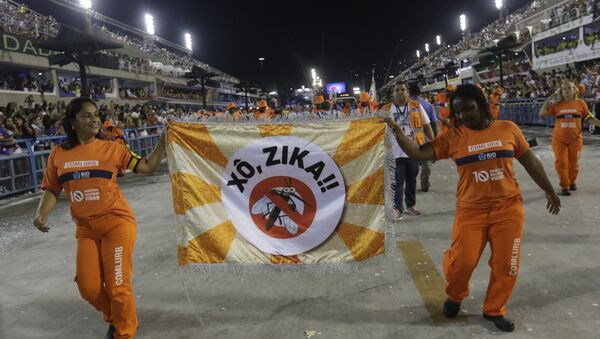 Ambassador to Russia Antonio Guerreiro said that the Zika virus outbreak is unlikely to affect the 2016 Summer Olympics in Rio de Janeiro.

"I have no information that there are talks underway to move the Olympics someplace else," Guerreiro told RIA Novosti.

According to the diplomat, the mosquito-borne virus has mainly affected northeastern parts of the country, while Rio de Janeiro, located in Brazil's southeast, is among the regions least affected by the outbreak.

"I don't think the virus will significantly affect the Games," Guerreiro stated.

Brazilian authorities are taking all necessary measures to stop the spread of the Zika virus ahead of the 2016 Summer Olympics in Rio de Janeiro, Brazil's Ambassador to Russia said.

"Brazilian authorities are taking all necessary prevention measures, carrying out disinfection of possible hotbeds and mosquito breeding grounds. This work will also be carried out at Olympic venues, as well as in adjacent areas," Guerreiro told RIA Novosti.

"Hence, the work is being carried out on a very large scale and at a nationwide level," Guerreiro reaffirmed.

Brazil hosts the first Olympic Games in South America on August 5-21 in Rio.

The Zika virus is transmitted by mosquitos active in daytime. It does not cause serious complications in adults, but is suspected of leading to severe brain defects and microcephaly cases in newborns.

The Zika outbreak originated in Brazil in the spring of 2015, spread across Latin America and gained widespread media attention as confirmations of first cases emerged in Europe and the United States in recent weeks.

The World Health Organization (WHO) declared the outbreak a public health emergency last week after the virus spread across dozens of countries and first cases of Zika’s sexual transmission emerged.