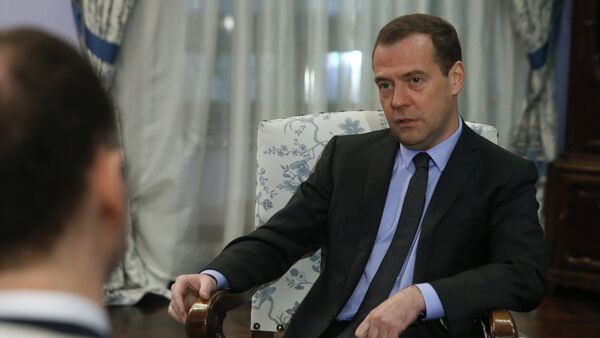 Russian Prime Minister said that member states of the European Union and NATO need to return to the former formats of cooperation with Russia that should be based on mutual respect and interests.

Medvedev to Share Russia's Position on EU Security During Munich Conference
MOSCOW (Sputnik) – The member states of the European Union and NATO need to return to the former formats of cooperation with Russia that should be based on mutual respect and interests, Russian Prime Minister Dmitry Medvedev told Sputnik in an interview.

“I am sure that Russia and our partners in NATO and the European Union are not only able to but are quite simply obliged to resume the former formats of cooperation. On the condition that it would be built on mutual respect of each other's interests. We never rejected such partnerships, which cannot be said about our colleagues from the European Union and NATO,” Medvedev said.

Medvedev said that today’s world has become more unpredictable and faces more threats than it did before, but cooperation with the European Union and NATO have taken steps backwards.

“After all, those formats of cooperation between Russia and the European Union and the North-Atlantic Alliance were created to eliminate incipient conflicts in a timely fashion. And now, when such forms of communication are most needed, our partners reject them,” Medvedev said.

Discussion and dialogue are needed constantly and Russia has always been ready for such contacts, the prime minister said.

“Dialogue is a 24-hour and a year-round concept. At least we are always open to discussing of the most pressing matters,” Medvedev added.

NATO is attempting to get political gain from confrontations with Moscow because it is much easier to demonize Russia than actually handle the serious problems at hand, Russian Prime Minister said.

“In my opinion, our western colleagues from NATO simply derive political gain from confrontation. It is easier to demonize Russia and attribute the current issues to it, than to acknowledge the serious problems which exist within the system of European security. And also to acknowledge its own share of the responsibility for today's crises,” Medvedev said.

Medvedev noted NATO’s eastward expansion towards Russian borders that has been ongoing for several years as well as the deployment of US air defense systems in Europe that are of great concern for Russia.

“And each time the organization refused to take into account our concerns over our own security. Let alone the recent statements by the bloc's leadership. It appears that there is no greater threat to the world than Russia. We were once compared to ISIL [Islamic State, IS] militants,” Medvedev said.

Russia and NATO should make efforts to find a compromise instead of continuing confrontation, Dmitry Medvedev stated.

"But then our partners returned to the reasoning of confrontation. Now it is necessary to find compromises, not compare ambitions. To reestablish trust and return to joint initiatives that have been frozen. To join forces in the fight against international terrorism, which is spreading in the world like plague," Medvedev said.

He reminded that in 2010, at the Russia-NATO summit in Lisbon, the parties were able to reach a "serious compromise," confirming that they did not view each other as adversaries.

NATO has been increasing its presence in Eastern Europe since Crimea rejoined Russia in March 2014, following a referendum the West refused to recognize as legitimate, instead blaming Moscow for violating Ukraine's territorial integrity. Russia has denied the allegations and has repeatedly stated that the alliance's increased activities near its borders undermine regional and international stability.

Medvedev represents Russia, alongside Foreign Minister Sergei Lavrov, at the Munich Security Conference taking place on February 12-14. More than 20 heads of state and dozens officials from around the world are expected at the event. The agenda of the meeting focuses on key world policy issues such as fighting international terrorism, UN and NATO reform, "hot spots," and strengthening regional and global security.

Read the full version of the interview here