Armenian President Sees No Improvement of Relations With Turkey Opportunity 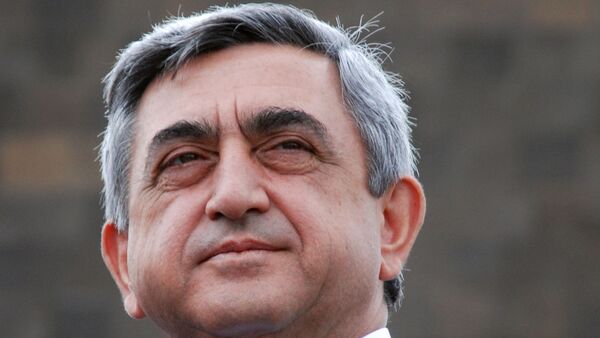 Armenian President Serzh Sargsyan said Friday he did not see any opportunities for improvement of relations with Turkey.

YEREVAN (Sputnik) – "At the moment I do not see an opportunity of any progress in the issue of relations with Turkey. We have been living in such conditions for 25 years and we are used to them and got adapted to them," Sargsyan said at a meeting.

Turkey and Armenia have no diplomatic relations with their border closed since 1993.

Relations between the two countries deteriorated following the escalation of the Nagorno-Karabakh conflict, as Turkey openly supports Azerbaijan’s position in the dispute. Turkey also does not recognize the Armenian genocide by the Ottoman Empire.

Turkish Media Fears Russian-Armenian Air Defense Could 'Heat Up Caucasus'
The conflict between Armenia and Azerbaijan began in 1988, after the predominantly Armenian Nagorno-Karabakh autonomous region announced its secession from the Azerbaijan Soviet Socialist Republic. Nagorno-Karabakh proclaimed its independence in 1991, prompting a war that lasted until a Russia-brokered ceasefire was signed in 1994. In September 2015, the conflict escalated with the sides blaming each other for violating the truce.

The Armenian genocide was a series of mass killings and starvation ordered by members of the Ottoman government during and after World War I culminating in 1915. The tragic events claimed the lives of an estimated 1.5 million Armenians, according to Yerevan data. Turkey refuses to name the massacre a genocide, claiming that Turkish nationals were also among victims.