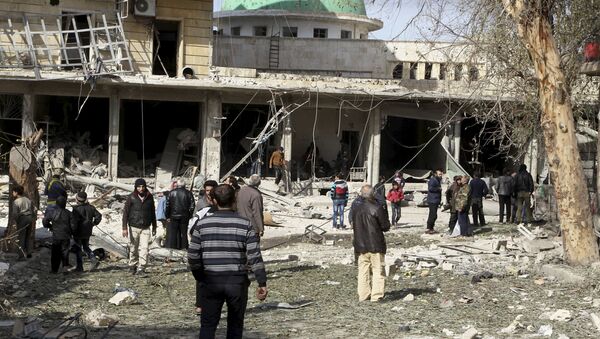 Russia Sends Humanitarian Aid to Syrians Blocked by Daesh
UNITED NATIONS (Sputnik) — UN High Commissioner for Human Rights Zeid Raad Hussein on Thursday condemned the appalling human rights situation in and around the city of Aleppo and other parts of Syria, including Deir ez-Zor, calling for the prompt resumption of Geneva peace talks.

"The warring parties in Syria are constantly sinking to new depths, without apparently caring in the slightest about the death and destruction they are wreaking across the country. It is a grotesque situation," Hussein said in a statement published on the website of the UN human rights office.

Since the latest offensive against the extremists by the Syrian government forces began last week in the Aleppo governorate, some 51,000 civilians have been displaced and a further 300,000 are at risk of being placed under siege, he stressed.

"The High Commissioner stressed that hundreds of thousands of civilians in other parts of Syria are also facing dire humanitarian conditions, particularly those under sieges imposed both by Government forces and affiliated armed groups, and by armed opposition groups, including ISIL [Islamic State]," the statement added.

Situation in Syria Requires Urgent Ceasefire- French Foreign Ministry
People in the localities of Moadamyeh, Madaya, Deir ez-Zor, Fuah and Kafreya are "in an utterly desperate situation," due to severe malnutrition and lack of access to medical care, Hussein noted.

"Some 200,000 people living under an ISIL-imposed siege in Deir ez-Zor are experiencing severe water shortages and a total lack of electricity. Reports indicate that several people accused of smuggling food into the city have been executed by ISIL fighters," the statement continued.

Militants' Defeat in Aleppo Has US Scrambling to Derail Syrian Juggernaut
The UN human rights chief has also pointed at the necessity to resume the intra-Syrian talks in the Swiss city, put on hold until February 25.

"It is unconscionable that the various parties cannot even manage to sit around the table, when, because of their actions, more than a quarter of a million people have died, and the rest of the population is suffering to such a degree. A lasting peaceful resolution of this horrific war must be built on a solid foundation of human rights," he highlighted.