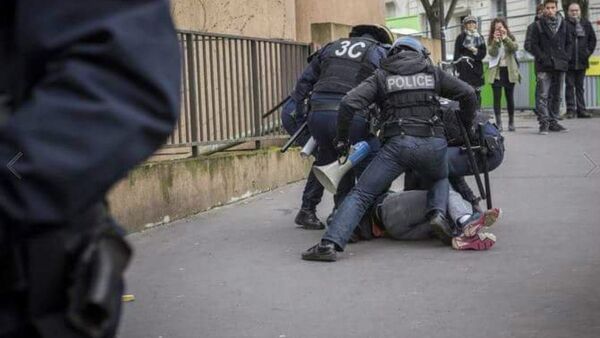 © Sputnik
Subscribe
A participant in a pro-Kurdish protest against the killing of sixty people in Turkey prompted a harsh reaction from French police, one of the leading activists told Sputnik.

Erdogan's Policy Against Kurds Deepens Refugee Crisis
On Monday, February 8, Berivan Firat of the European Kurdish women's movement was one of the speakers at a protest against the recent murder of 60 people by Turkish forces in the town of Cizre.

During the protest outside the Turkish Embassy in Paris, the police at some point told protesters to move to the nearby Place de Bolivie.

While protest coordinators were trying to get the protesters to move, the police attacked and the beatings began, Firat said.

"I was in a crowd of demonstrators and felt someone grab me, that is, the police dragged me tooth and nail. A few seconds later was on the ground, and three police officers tried to do something to me which I did not understand, because it happened very quickly, and at some point I lost consciousness," Firat told Sputnik.

"When I woke up, I was covered in blood, my pants were completely covered in blood. I panicked, I did not understand anything, and then I was told that it was not my blood, but the blood of another person," she added.

She then saw another activist, Morad, who was lying face-down on the ground, bleeding from his head. Morad apparently tried to protect Berivan from the police, and was beaten.

Massacre of Kurds is ‘Policy of Criminalization’ by Turkish Authorities
When she was being detained among 14 others who were brought to the police station, she was not allowed to sign the protocol without reading it. She and others were released a day later.

Firat blames the European Union and France for the way she was treated, together with the Western desire to appease Turkey, a NATO ally which also plays a part in the Syrian conflict and the migrant crisis.

"Other than that, we as women were humiliated. I don't think such things are worthy of France, the France I love, the France I know," Firat told Sputnik.

In Ankara, the pro-Kurdish Peoples' Democracy Party previously said that Turkey committed a massacre earlier in February against a group of mostly wounded people who were hiding in a basement; Firat also claims that chemical weapons were used. Turkish Prime Minister Ahmet Davutoglu admitted that civilians were killed, but claimed that most were members of the Kurdistan Workers' Party (PKK).