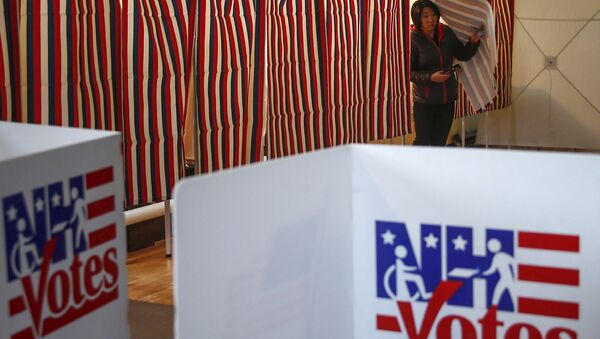 Election moderators from the second largest town in New Hampshire have estimated voter turnout will be above 50 percent.

NASHUA (Sputnik) — Election moderators from the second largest town in New Hampshire, Nashua, have estimated voter turnout will be above 50 percent by the time polls close on Tuesday night.

"This is a very political ward. People get out, they vote," Nashua Ward 1 election moderator Pat Chadwick told Sputnik on Tuesday.

According to multiple election moderators, a large wave of voters tend to go to the polls in the final hours between 5:00 p.m. and 8:00 p.m.

"We could conceivable go to 60 percent, 65 percent, maybe even more," Chadwick added.

The New Hampshire Secretary of State, Bill Gardner, anticipated a large turnout for the 2016 presidential primaries, forecasting as many as 550,000 voters going to the polls in a state of 1.3 million people.

"We are going to be pushing a pretty high number before the end of the day," Barrett noted.

The New Hampshire polls will close by 8:00 p.m. on Tuesday, with final results on the Republican and Democratic presidential picks expected to be reported well before midnight.

According to early exit polls, Donald Trump appears to be leading the Republican race, and Bernie Sanders is ahead of Hillary Clinton on the Democratic side.