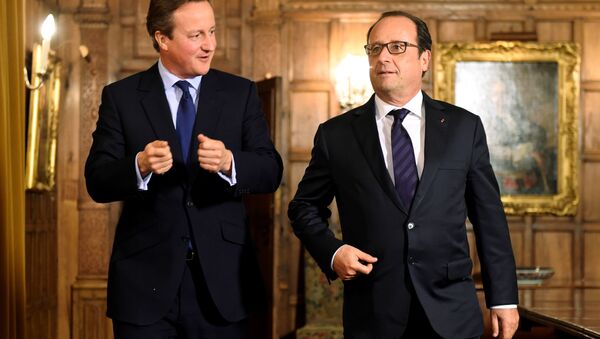 © AFP 2022 / Alain Jocard
Subscribe
France has taken the politically unusual move of stepping into the row over whether or not Britain's exit from the European Union would mean an end to the unique border arrangement agreed between Paris and London.

The UK is not a member of the Schengen area — comprising 26 European countries who agreed to remove all border controls between their countries to allow for a borderless Europe and encourage the greater movement of people and goods. The UK is not alone in living outside Schengen; Ireland is not a signatory.

However, Britain's transport links with France — its nearest continental neighbor — put it in a unique position in Europe. Ahead of the opening of the Eurotunnel between Folkestone on the south-east coast of England and Frethun, in the Nord-Pas-de-Calais region of France, London and Paris signed a special agreement to allow for French and British border guards to operate in each other's countries — an unusual variation on national sovereignty.

The Sangatte agreement — signed in 1991, ahead of the opening in 1994 of the Eurotunnel — allowed French border and immigration staff to check passengers before departure from the UK to France and for their British counterparts to do the same in France for departures to the UK.

No.10 have doubled-down on Calais "jungle" moving to UK after EU withdrawal. Bid to distract from renegotiation?

Nine years later, in 2000, French staff began carrying out immigration checks at the London end of the Eurostar rail service and UK staff did the same in Paris. This was mainly because of an increase in the number of people arriving in London without adequate documentation, because French SCNF railway staff were not obliged to check travel documents ahead of departure — as is common elsewhere in Europe.

Meanwhile, a similar agreement — known as the 'Treaty of Le Touquet' and signed in 2003 — allowed for similar arrangement to be put in place on the popular short-sea ferry services between Dover, in the UK and Calais and Dunkirk in France.

@DavidDavisMP The Le Touquet agreement was because there was already a camp at Sangatte. It was no the cause of camps

France has established immigration checkpoints at the Port of Dover, where the French Border Police carries out immigration entry checks into the Schengen Area on passengers traveling to Calais or Dunkirk. More importantly, the UK has immigration points on French soil in Calais and Dunkirk. Importantly, this means that people refused entry to the UK remain on French soil.

This — in turn — has created the so-called "Calais jungle" in which thousands of migrants intent on reaching the UK via the Eurotunnel or by ferry — have congregated near the tunnel and ferry terminals, which has caused major issues between Paris and London and — more importantly — in the British media. 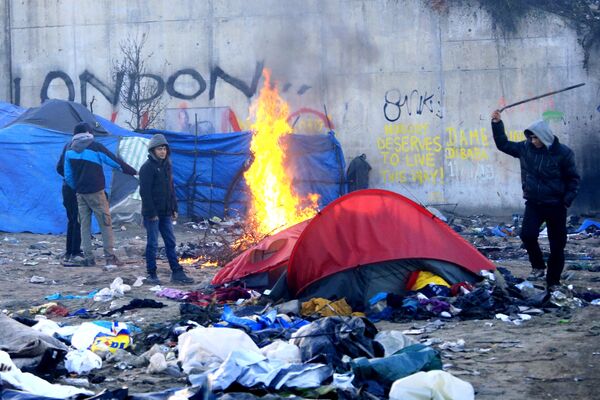 A migrant hits a former shelter with a stick in a dismantled area of the camp known as the "Jungle", a squalid sprawling camp in Calais, northern France, January 17, 2016.
© REUTERS / Pascal Rossignol

However, UK Prime Minister David Cameron caused a stir when he announced this week that a Brexit would lead to the border controls being moved back to UK soil, which would threaten to move the "Calais jungle" to Dover — where it would be a blight on the resources of the UK.

Euroskeptics were fast to accuse Cameron — who is fighting to keep the UK in the EU — of scaremongering and pointed to the comments of French Interior Minister Bernard Cazeneuve who said: "Calling for the border with the English to be opened is not a responsible solution. It would send a signal to people smugglers and would lead migrants to flow to Calais in far greater numbers. A humanitarian disaster would ensue. It is a foolhardy path, and one the government will not pursue."

Whatever the status of the UK's membership on the European Union, its unique border control agreement with France is unlikely to change, since it benefits both London and Paris.