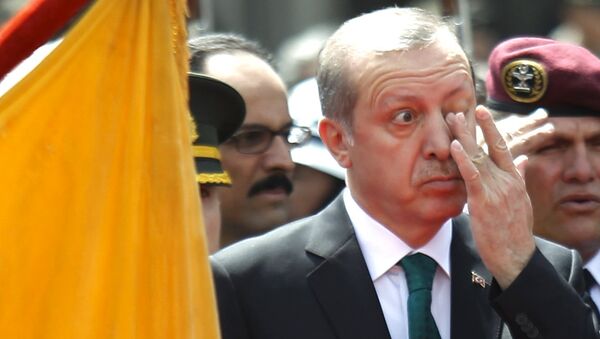 © REUTERS / Guillermo Granja
Subscribe
Omer Bulur, a resident of the city of Siirt located in Turkey’s southeast, is being accused of spreading terrorist propaganda and offending a head of state.

Turkey's Invasion of Syria? Moscow Keeping an Eye on Ankara's Moves
During the funeral of his cousin, Er Recep Beycur, a Turkish serviceman who was killed by an explosion in the line of duty, Bulur exclaimed: "Brother kills brother! I sent my brother to the army alive and now I’ve received his dead body. Let the president hear about this!"

The authorities deemed this outburst an act of terrorist propaganda and an insult to the head of state, culminating in a potential jail term for Bulur of 22 years.

"I didn’t plan anything, my words were a cry of pain," Bulur told Sputnik. "How would you feel if a live and healthy relative of yours whom you personally sent off to the army returned to you as a corpse?"

Ten days after the funeral the police began interrogating Bulur without even giving him a chance to mourn his brother in peace.

"First they accused me insulting the president, then of spreading terrorist propaganda. It happened after I posted on my Facebook page a letter of condolences released by the mayor’s office following an explosion in a neighboring village which claimed the lives of two young men. Because of this I was accused of supporting terrorists and the PKK," Bulur said. "I’m not a member of any political party, I’ve never had any problems with the law before, but now I’m facing a prison sentence just because I’ve said that brother is pitted against brother."

He also ruefully remarked that due to him and his late brother having different surnames – which is in fact a result of certain local cultural traditions dating back to the old practices of blood feud — some media outlets accused him of being a professional provocateur spreading dissent while others portrayed him as a terrorist or a Daesh militant.

"Provocateurs usually stage a provocation and flee. If I was a PKK member, I would’ve fled to the mountains; if I was a Daesh militant, I would’ve joined their ranks in Syria, Iraq or Libya. But I’m just an ordinary man who’s being demonized," he concluded.

000000
Popular comments
Jet fuel can't melt steel beams, True the answers are insane. This is NOT about not liking Muslims...this is about not liking A**holes. I know many Muslims that are great people.

Huh?
5 February 2016, 23:17 GMT2
000000
Jet fuel can't melt steel beams, It is always interesting when people continue to defend and support their governments destructive behavior....but these same people will be quick to comment in a negative fashion about what another country or its people do.