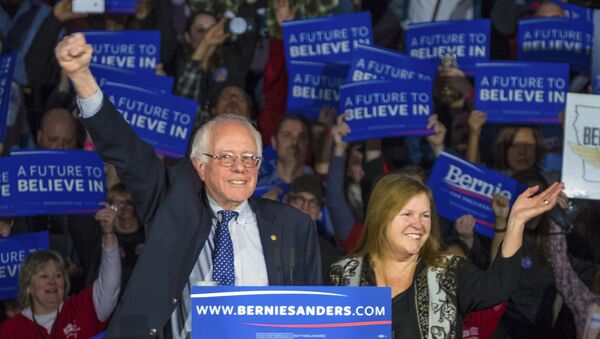 Sanders has long been dismissed by political pundits and trailed Clinton by as much as 40 percentage points just a few months ago. But on Tuesday morning, results showed that Clinton only narrowly won in Iowa, 49.8% to 49.6%.

The surging popularity of Sanders, culminating in the virtual tie, shows that "politics as usual [is] very much collapsing in on itself," Stein said in an interview with host Brian Becker on Radio Sputnik's "Loud & Clear."

"I think you have an American people that are in an all-out revolt," Stein said. "We see that both within the Republican Party, we see it inside of the Democratic Party and we also see it outside of the two major parties," Stein said.

The Iowa Democratic Party called the Clinton-Sanders race the closest in its caucus history, but said it would not hold a recount. A spokesman for the Sanders campaign said it does not intend to challenge the results of the caucuses.

According to Gloria La Riva, a presidential candidate from the Party for Socialism and Liberation, Sanders reflects the views of people who "not only are suffering poverty and great economic insecurity, but they see the wealth at the top."

Sanders: Congress Not in Tune With 'Radical Ideas' of Ordinary Americans

"People are being bombarded by this economic abuse, repression, exploitation, and they're fed up," La Riva told "Loud & Clear."

She said Sanders' success in Iowa is "very exciting" and shows that his progressive views "are getting a huge audience and I think it can only go up for him."

Stein accused the Democratic Party of recently starting to “sharpen its weapons” against the Sanders campaign. She said the Party has shown itself to be "very capable" of "sabotaging" popular progressive campaigns, such as that of Sanders.

Stein wonders whether Sanders, whom she called "a rebel within a conservative party," will be able to "fight the party or will his campaign ultimately be re-absorbed by it."