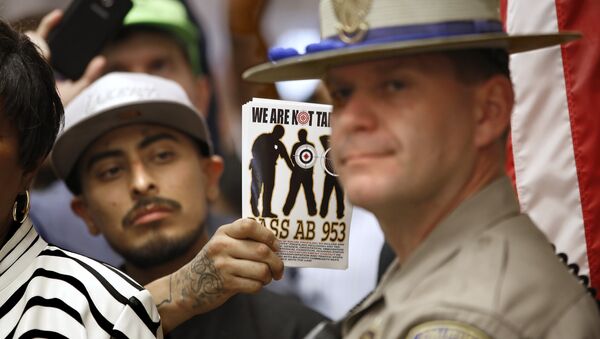 © AP Photo / Rich Pedroncelli
Subscribe
The survey, conducted January 14-17, found that a half of Americans were pessimistic about race relations in the future, compared with 44 percent a year ago and 30 percent as recently as January 2014, according to a survey by Rasmussen Reports.

Americans Honor Martin Luther King But Not Really His Dream
WASHINGTON (Sputnik) — Race relations in the United States have deteriorated in at least the past five years during the Barack Obama presidency, and half of Americans are pessimistic about the future of race relations, according to a survey by Rasmussen Reports released on Tuesday.

"Americans hoped the election of the first black president in 2008 would help heal the racial division that has plagued this country for much of its history, but a plurality (47 percent) of voters thinks Barack Obama has driven those of different races further apart instead," Rasmussen Reports said.

The survey, conducted January 14-17, found that a half of the respondents were pessimistic about race relations in the future, compared with 44 percent a year ago and 30 percent as recently as January 2014.

Everyone Agrees: US Race Relations Hit 20 Year Low
Only a fifth of the respondents said they believe race relations are improving, compared to 38 percent five years ago, according to the poll.

Analysts have speculated that well publicized police killings of mostly unarmed African Americans and often violent protests against police brutality are some of the main factors responsible for the growing pessimism about the future of race relations in the United States.

Unlike most questions related to race, there was not a wide difference of opinion on these questions between African Americans and whites, the Rasmussen Reports survey indicated.