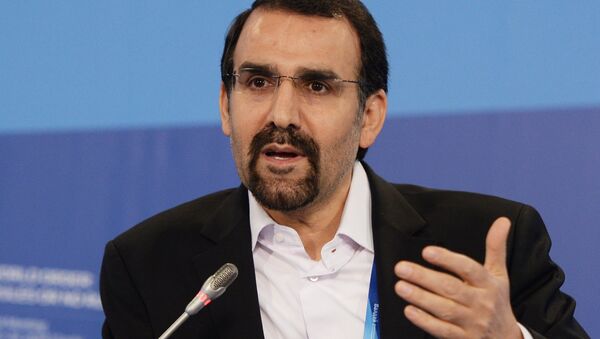 The lifting of the Western sanctions against Iran opens new opportunities for the Islamic Republic and Russia to work together, Iran’s Ambassador to Moscow Mehdi Sanaei told Sputnik.

"As President Hassan Rouhani said, "The implementation of the Join Comprehensive Plan of Actions won’t be harmful to any country. Friends of Iran may rejoice while competitors have no reason to worry," the ambassador remarked.

Sanaei pointed out that up until recently the sanctions had a detrimental effect on the trade between Russia and Iran. Furthermore, the banks of the two countries can now freely cooperate with each other without any hindrance.

"During the period of sanctions, there was always a third party covertly influencing the bilateral relations between Iran and Russia – the West. Now that influence will begin to decrease," the ambassador noted.

He also remarked that the extensive bureaucratic systems of both countries often hinder the cooperation between the two countries, and that the improvement of bilateral relations would hopefully alleviate this problem.

According to Sanaei, tourism is also an important sphere for developing the cooperation between Russia and Iran.

"Our two countries have a great potential to attract tourists. Through travel, our two nations get a chance to better understand each other. Foreigners usually change their perception of Iran after they visit our country," Sanaei said.

He added that Iran is about to simplify the visa regime for Russian tourists.

Sanaei also said that the lifting of sanctions won’t affect the oil prices.

"It is already known that oil prices are falling because of other factors, and Iran is suffering from this decline as well. So Iran’s entry to the global oil market will be balanced and gradual,” he said.

The ambassador also said that Iran’s priority in foreign relations is to expand and develop cooperation with Russia, China and India, adding that Tehran is deeply grateful to Moscow for the latter’s assistance during the negotiations regarding the Iranian nuclear program.

"Recent events urge our countries to develop closer cooperation in many areas," Sanaei said. "While some countries only seek to create and maintain tensions, Iran and Russia should work together to stabilize the situation and to combat international terrorism."

The United Nations, the European Union and partially the United States lifted their sanctions against the Islamic Republic after the International Atomic Energy Agency verified late on Saturday Tehran’s compliance with a nuclear agreement reached last July. The lifting of sanctions allows Iranian oil producers to re-enter the market.