US Should Not Sensationalize Mass Shootings in Media - Obama 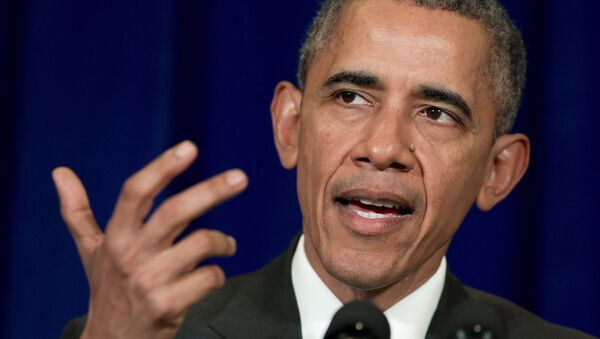 © AFP 2023 / SAUL LOEB
Subscribe
International
India
Africa
US President Barack Obama said that the US media could contribute to preventing mass shootings in the country by not bringing too much attention to violence.

WASHINGTON (Sputnik) — The US media could contribute to preventing mass shootings in the country by not bringing too much attention to violence, US President Barack Obama said during an interview.

"We have to do a better job as a culture and as a society not sensationalizing violence as a way of getting attention," Obama said in an interview with YouTube creators on Friday.

The president explained that the First Amendment of the US Constitution prevents the government from directly limiting how violence is portrayed in the media, but people and the media should not give notoriety to mass shooters.

"The reason I emphasize common-sense gun safety measure is not that we can eliminate all this violence completely, but we can reduce it, the same way we've reduced traffic fatalities…we can do the same things with guns," Obama said.

Over the past year, the United States has seen a growing number of mass shooting incidents. In December, a radicalized couple shot and killed 14 people at the Inland Regional Center in in the Southern California city of San Bernardino.

Several weeks after the San Bernardino shooting, Obama unveiled executive actions on gun safety and background checks for gun buyers. Obama’s new regulations, however, have faced widespread opposition, even though the United States has the highest rate of gun violence among any developed country in the world.