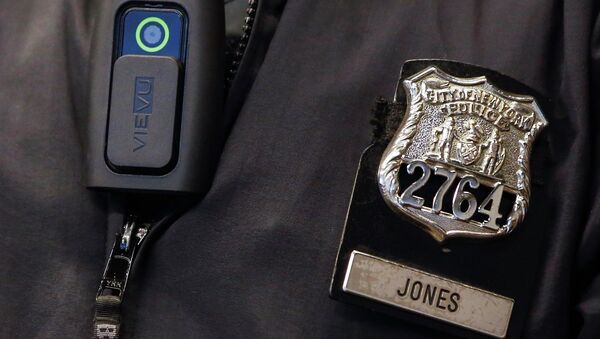 © REUTERS / Shannon Stapleton/Files
Subscribe
International
India
Africa
Media outlet NY1 spokesperson said that the refusal by NYPD to provide unedited video footage of its body camera program for a reasonable price violates state law and will be appealed in court.

"NY1 initially submitted a request to obtain video files from the NYPD’s pilot body camera program," the spokesperson said on Friday. "The NYPD agreed to provide edited footage, but at a cost that is prohibitive and that we believe undercuts the purpose of our New York Freedom of Information Law (FOIL) request. We are appealing their decision."

"If the NYPD gets its way, the promised ‘transparency and accountability’ would be contingent on the willingness of members of the public to pay exorbitant review and redaction fees every time footage is requested," NY1 said according to court documents. "That cannot be the law."

NYPD spokesperson told Sputnik that the lawsuit is being examined.

"We are in the process of reviewing the lawsuit," the NYPD spokesperson said on Friday.

The NYPD adopted the body camera program in 2014 following a US Judge’s decision to order the department to test the cameras for one year. The ruling came amid a wave of protests in New York City surrounding the police’s numerous killings and treatment of minorities.

US police killed more than 1,000 individuals in 2015, according to media reports.