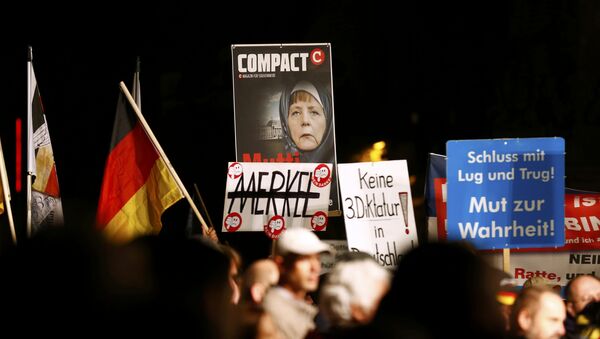 The majority of German citizens believe their security and finances are threatened because of the current refugee crisis, the German magazine Focus Online writes.

Poll Shows German Women Beginning to Oppose Idea of More Refugees
The German population is becoming increasingly skeptical toward Germany's policy of open doors. Every second German believes that the refugee crisis cannot be overcome, while 48 percent of the population stated they are afraid of refugees, a recent ARD survey reveals.

In 2015 more than one million refugees entered Germany, fleeing violence and poverty in their home countries. Despite overburdened municipalities and crowded refugee facilities, German Chancellor Angela Merkel optimistically repeated her credo: "We can do this".

However, the most recent polls reveal that this optimism in Germany is decreasing. 51% of Germans believe that their country won't be able to resolve the current refugee crisis, Focus Online writes.

The skepticism among the population has especially risen after the massive attacks on women on New Year's Eve in Cologne and other German cities. Hundreds of women were reportedly robbed, threatened and sexually assaulted by small groups of aggressive men, allegedly mostly of Arab and North African origin.

Besides security concerns, 85% of Germans are afraid that they will lose material wealth because of the current migration crisis, a recent survey conducted by the consulting firm Ernst & Young showed.

"The refugee crisis has been the main subject in the debates and the media coverage in this country for several months," EY representative Thomas Harms told the German magazine Focus. As a result, this issue becomes more important for people than in fact it should be, the expert claimed.

Despite this, German consumers access their own financial situation for 2016 as pessimistic. Many of them don't fear job losses, small pensions or illness. However, they remain anxious about more global issues such as the economic slowdown, environmental pollution, the debt crisis in Europe, and the current refugee crisis, which was assessed by the European Commission as the worst migration crisis since WWII.