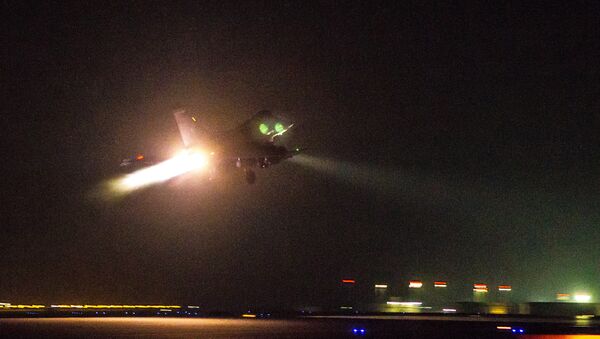 Daesh to Increase Terrorist Attacks - CENTCOM Commander
WASHINGTON (Sputnik) — The US-led coalition against Daesh conducted 24 airstrikes in Syria and Iraq resulting in the destruction of the terrorist group’s infrastructure, the US Central Command (CENTCOM) said in a press release on Friday.

Airstrikes near three Syrian cities Raqqa, Manbij and Mara, were carried out on Thursday, and destroyed Daesh tactical units and gas and oil separation plant, according to the press release.

The coalition conducted 19 airstrikes on Thursday near nine Iraqi cities to the north and west of Baghdad, including Mosul, Ramadi and Tikrit. The strikes destroyed multiple Daesh tactical units and fighting positions, as well as Daesh headquarters and a command and control node.

Daesh, is a terrorist group outlawed in many countries including the United States and Russia; it has seized large areas in Syria and Iraq and declared a caliphate on territories under its control.