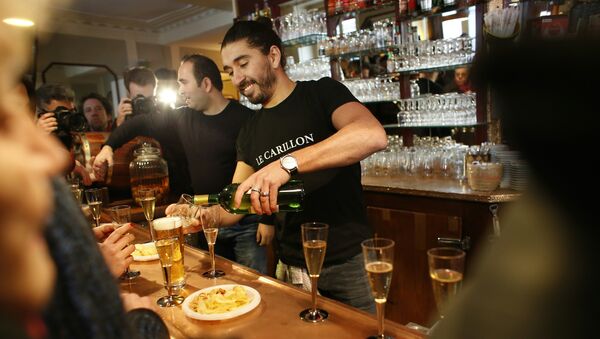 While the memories of the horrific Paris attacks are still fresh, one of the venues targeted by terrorists, the bar Carillon, has reopened its doors to customers almost two months after 15 people were murdered on its terrace.

The location, popular among Parisians and tourists, reopened Wednesday, the Associated Press reported.

'We Will Not Surrender': Paris' Bataclan to Reopen Despite Bloodbath Attack
The Carillon became the third site of those targeted by Daesh (Islamic State) militants in last November to be back in business, following in the footsteps of La Bonne Biere and the Bataclan concert hall.

Bouquets of flowers, notes, and pictures of victims remained in front of the café as the first clients entered. The bar staff greeted every new customer with a "Welcome to the Carillon" phrase and a glass of champagne, according to AP.

The first customers underscored the importance of the event, saying it’s a good sign of the return to normal life.

"We are lucky enough to be alive," Fatim Layachi, a local resident living next to the venue, told AP. "We must continue to live and to chat in cafes, drink a glass, even if today it's more meaningful than usual, obviously."

The Algerian owners of the bar did major cleaning and maintenance, replacing windows damaged by gunfire, the Local reported.  Bar owners stated that it’s crucial “to continue [running the bar] to have good times” again.

Bar Where Terrorists Killed 5 People in Paris Attacks Set to Reopen
France has been struggling to revive tourism in the aftermath of a coordinated series of attacks that killed 130 people, including foreigners.

Hotels across the nation saw a 25 percent decrease in occupancy levels in the two weeks following the attacks, according to data provided by state agency Insee. Hotels in Paris saw even steeper declines. The number of customers during winter holidays shrank over 30 percent, Evelyne Maes, the president of Paris region hotel union UMIH said.

High profile museums, including the Louvre and the Palace of Versailles lost tourism, seeing declines in attendance of seven and four percent respectively.

A state of emergency has been in place in Paris since the attacks, with approximately 6,000 troops visibly deployed in the capital region.