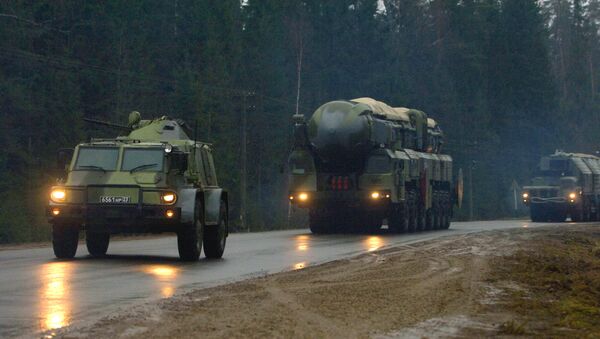 The five regiments, armed with Topol, Topol-M and Yars mobile missile systems, will test their combat readiness on designated patrol routes in the Tver, Kirov, Sverdlovsk and Irkutsk regions, as well as in the Mary El republic, the ministry said in a statement.

Special attention will be paid to the practice of deterring air attacks. Russian Special Forces will take part in the drills, simulating the enemy.

According to the ministry, the SMF will hold over 100 exercises in various formats in 2016.

During the winter training period, 40 SMF regiments and units will take part in the drills.

000000
Popular comments
Please quit the showboating saber rattling and get down to business. The enemy at the Gates has long passed the Gate.. USA-NATO-Israel-Georgia Genocide Attack against Pro Russians and Russians in South Ossetia, Abkazia, and again in Donetsk National Republic (DNR) , Lugansk National Republic (LNR), etc. How many more Russians and Pro Russians need to be abused, tortured, missing, maimed and murdered by this United States of Israel NATO and its Axis, before Russia wakes up with a fitting response? ____________ *** Free Viktor Bout and All Pro-Russians, tortured, missing, murdered and or falsely imprisoned, in USA and NATO Secret Prison Axis, Account For All, Remember and Lawfully Avenge All Forevermore.**