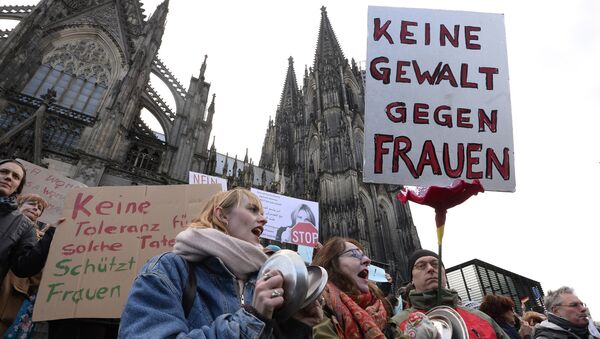 The spate of sexual assaults against women in Cologne, Germany by Arab and North African migrants has shocked German society and demonstrated that Chancellor Angela Merkel's migration policy has no chance of success until migrants can be made to accept the social and cultural norms of their newfound homes, suggests The Financial Times.

The series of attacks on over 100 women in Cologne during New Year's celebrations by masses of men of Arab and North African origin has led to shock and outrage across Germany, with some citizens, particularly women, now desperate to stay away from public places, while others have vowed to form civil militias to protect their communities.

Commenting on the explosive tensions surrounding the events, an anonymous op-ed in The Financial Times has admitted what many others have suggested has been obvious for a long time – that Chancellor Merkel's "decision to allow more than 1 million migrants from the Middle East and North Africa to take refuge in Germany has generated deep divisions in her country."

German Police Under Orders to Keep Refugee Crimes Off the Radar
"Few events have sharpened the debate more acutely," the paper noted, "than the shocking mass sex attack on women in…Cologne on New Year's eve."

A leaked police report recently published by Der Spiegel has confirmed that police were underequipped and overwhelmed when as many as a thousand men 'of migrant background' gathered outside the city train station on New Year's Eve, attacking and sexually assaulting women. FT noted, however, that police action (or inaction) aside, there are other deeper and more serious "aspects of these crimes [which] cannot be ignored."

"The fact that the overwhelming majority of the assailants were of African and Middle Eastern origin has raised fears about whether young immigrant men are well enough integrated into German society," the paper noted. Add to that "the huge flow of asylum seekers into the country, which shows no sign of abating in 2016," and "this matter [becomes] all the more pressing."

Playing the concepts of multiculturalism vs. the melting pot off of one another, FT emphasizes that while "immigrants should never be forced to give up their linguistic, religious and cultural roots," the chancellor "is right to insist that all minorities must respect Germany's basic values, its democratic and human rights and its commitment to religious and sexual equality."

‘Cologne-Style’ Attacks on Women Reported in Austria, Switzerland
Ultimately, the op-ed notes, "in Germany, as elsewhere in Europe, fostering [community] integration will require immense patience and resources." Still, "whatever the difficulties, there can be no compromise when crimes are committed by gangs of any race or religion, Muslim or otherwise."

Citing a recent series of incidents in Britain involving child abuse by gangs of men of Pakistani heritage, "in which city authorities refrained" from acting "for fear of inflaming racial prejudice," the article suggested that "in the case of Cologne, there appears to have been a similar failure. The German police and national media were too slow to publicize the attacks, anxious perhaps not to fuel sentiment against foreigners."

"The events in Cologne will inevitably throw a fresh spotlight on the generous stance that Ms. Merkel has taken over the refugee crisis. Her approach is courageous and admirable." Nevertheless, the paper warns, "the German government cannot be complacent…as it manages the immense movement of migrants on to its territory."

Ultimately, the paper suggests, "Ms. Merkel's open door policy will only work if it is accompanied by a concentrated effort at integration which preserves her nation's postwar values. Germany –and its chancellor –cannot tolerate another Cologne."