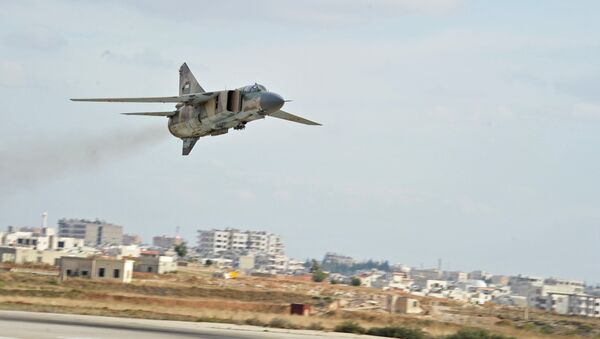 © Sputnik / Dmitriy Vinogradov
/
Go to the photo bank
Subscribe
At least three coordinated attacks on Daesh strongholds have reportedly been staged by the Syrian Ground and Air Forces in the northern areas of Aleppo province, where scores of militants were killed and wounded.

FARS quoted sources as saying that the Syrian warplanes carried out a series of sorties over the ISIL positions in the village of al Msibin and the town of Azaz, "and targeted them heavily, which ended in the mass destruction of ISIL military hardware and the killing of tens of militants."

"Minutes after the bombardments of the ISIL strongholds, the Syrian Army and the country's National Defense Forces (NDF) stormed the militants' defense lines, killing and wounding scores of terrorists and destroying their military equipment," the sources said. 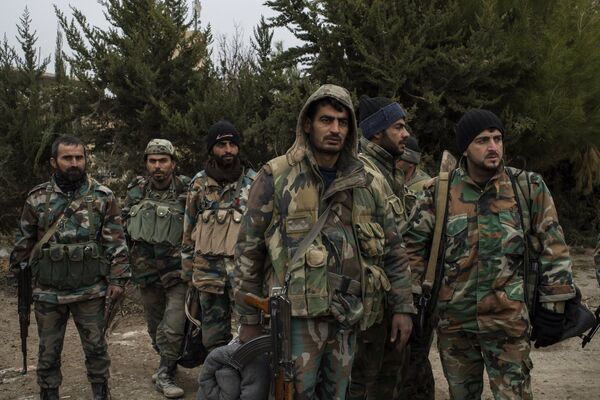 In another development, Syrian fighter jets conducted a fresh round of combat flights, targeting the militant groups' strongholds in the western, eastern and southern parts of Aleppo province, FARS quoted army sources as saying on Saturday; the sources confirmed heavy losses among the militants in the attacks.

#SYRIA in the course of two days, Russian aviation group destroyed six objects of oil trafficking in the Deir ez-Zor and #Aleppo provinces

In particular, the sources said that "the Daesh militants' positions in Darit Ezza in the western part of Aleppo came under massive bombardments of the Syrian warplanes, which claimed the lives of many terrorists."

The new offensives came just two days after the Syrian troops detected and destroyed a tunnel used by Daesh militants located to the east of the city of Aleppo city, near the Kuweires airbase.

Syrian Army Welcomes in New Year by Driving Out Terrorists in Key Provinces
Contributing to the Syrian Army's anti-Daesh effort is the Russian air campaign, which was launched on September 30, 2015, when more than fifty Russian warplanes, including Su-24M, Su-25 and Su-34 jets, commenced precision airstrikes on Islamic State targets in Syria at the behest of Syrian President Bashar Assad.

Late in December 2015, Russian Defense Ministry officials said that Russian fighter jets had carried out a total of 5,240 sorties since the start of the air operation against Daesh in Syria.