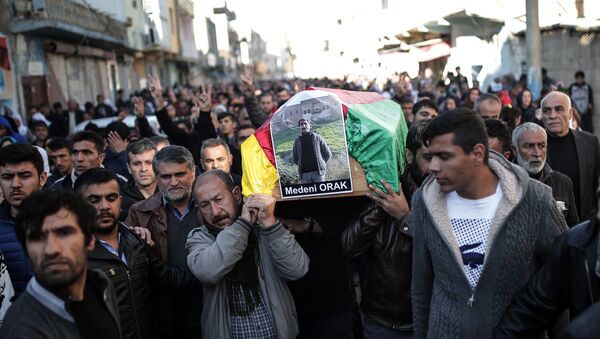 The death toll among civilians has surged as Turkish security forces continue a large-scale operation against Kurdish rebels in southeastern Turkey, shattering the last hopes to conclude a truce between the opposing sides.

Get Out of the Street: Turkish Police Violently Crash Kurdish Rally
Government forces have killed over 150 civilians and at least 200 Kurdish insurgents within the last week, according to human rights groups and local officials, cited by the New York Times. Amid escalating fighting across southeastern Turkey, hundreds of thousands of residents have abandoned their homes for safer regions.

“What people here in the west [of Turkey] do not realize is that we are one step away from a civil war,” Engin Gur, a resident of the Turkish South East who moved to Istanbul, told the New York Times.

The frozen conflict between state authorities and the Kurdistan Workers’ Party (PKK) reignited last July following the failure of a two-year ceasefire agreement.

'Vital' Regional Ally: Why Russia 'Should Play Kurdish Card'
Many experts observed that Turkish President Erdogan initially aimed to use the Kurdish conflict as a tool to strengthen the position of his Justice and Development Party (AKP), and consolidate the nation around its leader in the run up to parliamentary elections in November.

As soon as AKP won the elections by a large margin, the violence erupted.

Erdogan promised to eradicate the PKK, claiming that the group is the primary enemy of Turkey in spite of significant military achievements by the Kurds in Syria, including territorial gains that are aligned with the stated policies of Ankara.

“You will be annihilated in those houses, those buildings, those ditches which you have dug,” Erdogan pronounced, referring to trenches made by rebels in many southeastern cities. “Our security forces will continue this fight until it has been completely cleansed and a peaceful atmosphere established.”

At the same time Ankara officially claims it seeks a political settlement to the conflict. Once the military operation is finished, authorities state, talks with Kurds will be resumed.

It’s unknown who would take part in those negotiations on behalf of Kurds. Ankara has ruled out talking with the leader of pro-Kurdish Peoples’ Democratic Party (HDP) Selahattin Demirtas following his calls for Kurdish self-rule in the southeast of the country.

Hidden Agenda: 'Turkey Uses Syria to Achieve Its Own Goals'
According to the New York Times, the most probable candidate for the role of Kurdish diplomat is jailed rebel leader Abdullah Ocalan.

“They do not want to deal with the legitimate political actors, that is, the HDP or the PKK leadership directly,” Asli Aydintasbas, a fellow at the European Council on Foreign Relations, said, commenting on the stance of Turkish officials in the Kurdish conflict.

Aydintasbas added that Ocalan will likely demand a “form of self-rule or autonomy” for the Kurdish population.

As a result of the recent conflict, many settlements in southeastern Turkey have no electricity and many citizens are trapped in their houses with no food, according to the New York Times. Scarce reports from those regions say that once densely populated areas now resemble war zones similar to those of Syria and Iraq.

“The tanks fire all day and we have nowhere left to hide,” Nurettin Kurtay, a resident of Turkey’s southeastern province of Sirnak told the New York Times by phone.