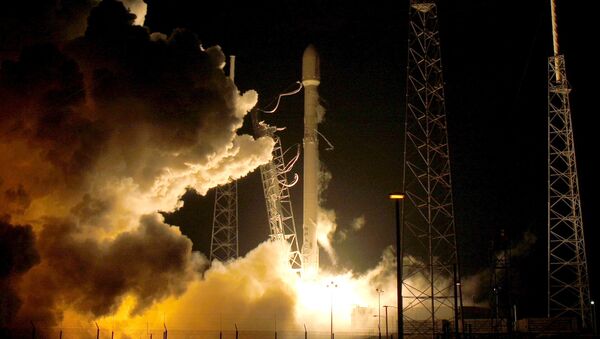 © REUTERS / Joe Skipper
Subscribe
The year 2015 in the field of space exploration saw both several milestone breakthroughs and massive failures in humanity's strive to reach the stars.

In 2015, NASA's Dawn probe became the first spacecraft in the history of mankind to orbit two different celestial bodies.

Dawn, launched in 2007, orbited the giant asteroid Vesta in 2011 before departing for the dwarf planet of Ceres in 2012. On March 6, 2015, Dawn entered Ceres' orbit to get a closer look at the planet that NASA believes has a large amount of ice and could even have liquid water below its surface.

Another NASA spacecraft called New Horizons came within 12,500 kilometers (7,800 miles) of Pluto on July 14, 2015, becoming the first to explore the dwarf planet.

New Horizons was launched in January, 2006. A year later it passed Jupiter at a record close distance of 2.3 million kilometers (1.4 million miles), relaying valuable information about the planet's atmosphere and magnetosphere, as well as data on its satellites.

Proton-M Brings Satellite Into Orbit for First Time Since May Accident
For the Russian space industry, 2015 was extremely difficult due to an abnormal amount of emergency space-related situations.

On May 16, a Proton-M launch vehicle, its Breeze-M booster and Mexico’s MexSat-1 communications satellite lifted off from the Baikonur Cosmodrome. The engine shut off abruptly 498 seconds after launch, 60 seconds before the satellite’s separation from the rocket and 160 kilometers above the Zabaikalsky Territory. The third stage, the booster and the spacecraft were incinerated during reentry.

On May 29, members of an inter-departmental commission attributed the May 16 accident to the malfunctioning of the third-stage's steering engine, which had been affected by excessive vibrations caused by substantial heat. A defective rotor in a turbine-pump unit was named the main "culprit" in the incident.

On the same day, a Progress M-26M cargo spacecraft, docked at the International Space Station (ISS), was to raise its orbit by almost 3 kilometers. The cargo craft’s engines were to have been ignited at 4:14 a.m. Moscow time and were expected to operate for about 15 minutes. But the engines did not ignite on time because of a malfunctioning control system. Experts from the Johnson Space Center in Houston reported the mishap to their Russian colleagues and it was decided to repeat the attempt at a later date. The station’s orbit was raised on May 18.

On April 28, an upgraded Soyuz-2.1a launch vehicle with a Progress M-27M cargo craft on board lifted off from the Baikonur Cosmodrome. The spacecraft did not separate properly from the rocket’s third stage, and so entered an undesignated orbit and started spinning quickly. Mission control experts had to cancel its docking with the ISS.

All efforts to stabilize the cargo craft failed, and the Progress started an uncontrolled descent into the atmosphere. It reentered the atmosphere on May 8 and burned up together with all the freight intended for the ISS crew. A state board of inquiry found that the spacecraft had been damaged when the launch vehicle’s third stage and the cargo craft had failed to separate properly. This was caused by a design defect in the spacecraft-rocket tandem, linked to the tandem’s frequency-dynamic characteristics.

On April 16, 2014, an EgyptSat-2 remote sensing satellite, manufactured for Egypt by the Energia space corporation under a $40-million contract, lifted off from Baikonur. In January 2015, Egyptian experts took control of the satellite. Media reports later suggested that the satellite’s computer went dead in May and that the spacecraft stopped responding. Efforts to reactivate the satellite failed, and it was presumed lost.

On November 23, the private  Israeli company Spacecom said its Russian-made Amos-5 telecommunications satellite had all of a sudden stopped functioning. The spacecraft was manufactured by the Reshetnev Information Satellite Systems in the Krasnoyarsk Territory using equipment supplied by Italy’s Thales Alenia Space. The satellite went dead on November 21 and no longer responds to mission control but continues to orbit the Earth.

On December 5, a Kanopus-ST military remote sensing satellite failed to separate from its new Volga launch vehicle and burned up during reentry three days later, a well-informed aerospace industry source told RIA Novosti. The Russian Defense Ministry reported neither the accident nor the spacecraft’s plunge into the ocean.

Putin Signs Decree on Dissolving Federal Space Agency - Kremlin
These failures made Moscow realize the need for managerial reforms in the industry and the need to boost investment in development and modernization.

On December 24, Roscosmos head, Igor Komarov, said that Russia's federal space program through 2025 would be tabled for consideration by the Russian government in the beginning of 2016. According to Komarov, the program requires approximately $20 billion in financing.

Priority Roscosmos projects include the development program for the Angara carrier rocket, due to be dispatched to the International Space Station from the Vostochny Cosmodrome in 2023 with a view to extending the orbital group of satellites' lunar exploration.

Falcon 9 Rocket With 11 Satellites Launched From Cape Canaveral - SpaceX
The US space industry likewise failed to avoid major accidents in 2015.

Following the crash, SpaceX founder Elon Musk said there was an overpressure event in the liquid oxygen tank of the Falcon 9 rocket.

Subsequently, the investigation attributed the accident to a strut securing a vessel with helium inside the second-stage liquid oxygen tank, the failure of which caused helium leakage that provoked over-pressurization and a subsequent burst.

However, SpaceX managed to end the year on a high note.

On December 22, its Falcon 9 successfully landed upright about 6 miles from where it was launched at Cape Canaveral, Florida, after having propelled 11 satellites into Earth's orbit.

This became the first time an orbital rocket has successfully completed a controlled landing on Earth.

One small bite for man

On August 10, NASA said the crew on board the International Space Station became the first astronauts to eat food grown in space. The fresh red romaine lettuce, of course, was not the first plant grown without gravity, but earlier NASA always sent such plants to Earth for examination.

"NASA's plant experiment, called Veg-01, is being used to study the in-orbit function and performance of the plant growth facility and its rooting 'pillows,' which contain the seeds," NASA said in a statement, adding that the technology could provide future pioneers with a sustainable food supplement for a journey to Mars.

Besides, NASA added that the experiment could incorporate gardening into the recreational activities for crews on deep space missions.

"Having something green and growing — a little piece of Earth — to take care of when living and working in an extreme and stressful environment could have tremendous value and impact," the agency added.

NASA is following in the footsteps of Russian cosmonauts who ate half of the Mizuna, or Japanese mustard, harvest aboard the ISS in November 2002.