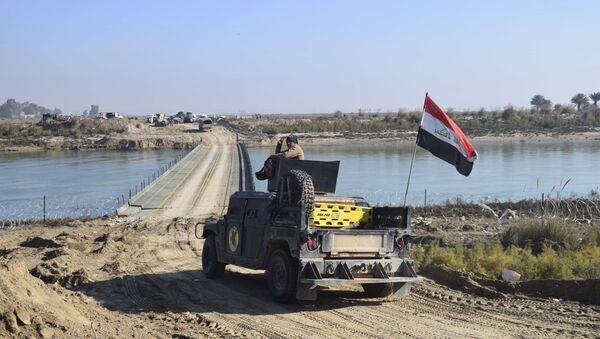 Iraqi Armed Forces killed 54 militants during anti-terrorist offensive near the city of Fallujah in country's Anbar province, a spokesman of the Iraqi military command said Saturday.

Iraq FM Vows All Legal Measures If Turkey Refuses to Withdraw Troops
MOSCOW (Sputnik) – On Tuesday, Iraqi troops launched an offensive in Anbar against the Daesh, also known as ISIL/the Islamic State militant group. The main aim of the offensive is to liberate Ramadi, the biggest city of the province, however Iraqi troops also advance in other directions.

He added that 21 more militant was destroyed in other suburbs of Fallujah.

Fallujah, located 42 miles west of the Iraqi capital Baghdad, is one of the largest cities in the Anbar province. In mid-July, Iraqi troops launched a major offensive to liberate Fallujah as well as Ramadi from IS militants.

The Daesh, is a terrorist group infamous for its atrocities, which is also outlawed in many countries around the world, including Russia and the United States.